I’ve always liked The Only Way is Essex star Bobby Cole Norris. He seems really down-to -earth and interesting. But he has gone up even further in my estimation since I read that his collection of nine unisex t-shirts and the famous Schlong Thongs which there is five of that he and ex-boyfriend fellow Towie star Harry Derbidge wore in Marbella recently entitled, the Sirius Collection supported the Hopefield Animal Sanctuary in Brentwood. I love animals. I always have and I love seeing any help they get towards their welfare and with Bobby’s profile it is sure to help the charity a lot.

Bobby and Harry wearing the Schlong Thong in Marbella.

“My first line with the Sirius Collection comes from a passion to create really cool and design led pieces that appeal to everyone of all ages. I have been hands on in developing the idea, working with the animal sanctuary and leading the designers. I feel proud to have developed a range that reflects my style and ensures the wearer ‘shines’ standing out from a crowd when wearing them!”

Hopefield Animal Sanctuary offered some of its animals to model the collection when Bobby went in search of a BFF for his adorable terrier Beau, who inspired the collection in the first place. The cutest little thing. Love him.

“We are so happy to have Bobby on board helping the sanctuary in such a fun way. As a huge animal lover, Bobby is a great advocator for us, and the animals loved modelling for him”.

Bobby wearing the “Flawless” t-shirt from the collection. 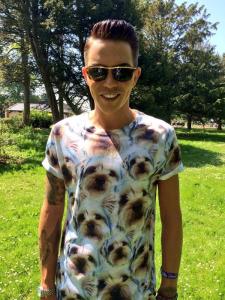 Sirius means two things in conjunction with the collection as Sirius means the brightest star in the night sky and Bobby wanted to create a collection which could help the wearer stand out in the crowd and the word also means the “Dog Star”.

The Schlong Thongs come in black, white, camo, purple and fuchsia while the t-shirts include many features that represent the charities cause such as a pug wearing glasses and a dickie bow with the words #Pash4Fash below the little pet, a pig in a photoframe wearing sunglasses looking all urban with the words I Woke Up Like This! underneath, the adorable little Yorkshire terrier Beau printed all over one t-shirt, two colourful parrot prints tops and a reptile picture on another top while there was also crown, banana and zebra print tops.

I really like the collection. It’s very unique. You get sick of the same thing been created over and over and again but this collection is a breath of fresh air and the animals are adorable. Been someone who loves animals, I couldn’t stop awwwing at the tops.

The collection will be sold online in aid of the charity which for more than thirty years has been rescuing abused, abandoned and neglected animals. The sanctuary looks after more than 300 animals like dogs, cats, horses, donkeys, cows, pigs, reptiles and many more and is funded completely by donations from the public.

The collection will help Hopefield Animal Sanctuary in Essex.

The collection is available from www.siriuscollection.co.uk for £25 each, with £1.50 of each top sold going to Hopefield Animal Sanctuary.

You can view it here ladies and gents!:

Burberry has been the epitome of luxury for years and the brand is in safe hands every season with Christopher Bailey at the helm. This season’s output has been no exception to the rule with a catwalk filled with many truly stunning pieces for you to incorporate into your wardrobe for the season.

In terms of print, Bailey chose to lose the romance by excluding love hearts in favour of polka dots combined with stripes for a collection that otherwise has a romantic feel to it of falling in love in the summertime. Or the spring. Take your pick. Either way, it was another amazing triumph for this very talented designer.

Three days ago two fires broke out in Bray. One of the fires was in Castle Street and my sister heard the bang from the fire which broke out on Castle Street when the fire broke out around 4:40pm. She was scared that I was near it because I had been finishing off some writing and said I’d catch up with her. Thankfully I wasn’t.

The fire broke out at Everest Cycles and destroyed the shop along with neighbouring businesses which included a hairdressers, a Polish supermarket, a health food store and a clothes shop that my mum was in the day before.

Eyewitness Peadar Smyth, owner of the Four Star Pizza which is nearby, said the owner of the bike shop ran upstairs to tell the man who was asleep at the times

“He got out just in time. But he didn’t even realise the building was on fire.”

A spokesperson for the Wicklow Fire Service told how four units of the Bray Fire Brigade arrived at the scene, including a water tanker from the Greystones Fire Brigade.

A gorse fire also in Bray occurred on the same day.

“The weather at this time of year means that a fire like this is not particularly unusual. However, we could be up there all night as the wind keeps blowing the fire on to other areas of gorse.”

There was smoke all over the town and members of the gardai were directing us on the roads. I’m just glad there was no one hurt and I hope that the businesses can get themselves back on track but I know that isn’t going to be an easy task.

The Belfast auditions for the fourth series of The Voice UK hit Belfast yesterday and took place at the Holiday Inn across the road from the BBC in Northern Ireland!

The show, which has been commissioned for both a fourth and fifth season, gave Irish hopefuls the chance to show off their talent yesterday as is the case each year since the first season.

I went along to audition and you can read about my experience on my music site guys here if you like:

Just realised that my World Cup crush James Rodriguez is married and they have a daughter. Such a sweet couple. Such a sweet family. Now will have to be on the look-out for another single hottie. Hehe. 🙂

Rodriguez secured the World Cup Golden Boot with six goals after full time ended in the final and the 22-year-old was filmed celebrating his win with his family. Thomas Muller and Lionel Messi who were in contention failed to catch up with his goal tally.

With an assist by fellow sub 23-year-old (And my fellow 1990s’ person! Always love to see a 1990s’ person doing well!) Chelsea’s André Schürrle, Götze volleyed home one of the goals of the tournament this year with amazing skill and great composure under all that pressure and looked positively dazed by the fact that he was Germany’s hero ensuring their win of the title against Argentina, their first win as Germany as opposed to West Germany and the first win by a European team of the World Cup in South America.

“It’s an unbelievable feeling. You score the goal and you don’t really know what’s happening. It hasn’t been a simple tournament, or year, for me and I owe a lot to my family and my girlfriend who always believed in me. But a dream became reality here.”

“I said to Götze: ‘OK, show the world you are better than Messi and can decide the World Cup,’” said Löw. “I told him that. I always had a good feeling about Götze. Argentina were becoming more and more tired, but we had players who could make a difference. Götze is a miracle boy, a boy wonder. He can play any position up front. I know he’s always able to decide a match, and it was a great winner he scored. But in extra time we had the energy to move forward. We didn’t want to go to penalties. We wanted the game decided before then, and we put them under more pressure.” 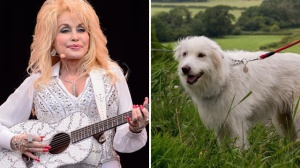 “We got a call from the main people with the government and they told us that the true owners did come forward. There was a language barrier; I think they were from another country. They got the dog back so I don’t get to take her home. I was looking forward to it.”

Good luck to Dolly and her owners. 🙂

It’s really sad to see prejudice like this still existing. Children need to know that there is many kinds of families in this world and that they are all amazing and perfectly normal. Diversity and family are two of the most wonderful things in our universe. We need to celebrate that. Not destroy it.

I’m deeply disappointed by the news I came across on Yahoo! Singapore that our National Library are going to destroy some children’s books that depict families with gay parents.

Two children’s books ‘And Tango Makes Three‘ and ‘The White Swan Express‘ were removed after a member of the public, a Teo Kai Loon, had e-mailed the National Library Board (NLB) voicing his concerns about them.

… In supposedly two days, NLB responded to Teo’s e-mail complaint, stating that the books have been withdrawn following his feedback. NLB emphasised that it “takes a strong pro-family stand in selecting books for children” and “when library visitors like yourself [Teo] highlight to us any conflicting content within books, we review such books thoroughly and withdraw them from circulation”.

The response was signed by Tay Ai Cheng, the assistant chief executive…

I feel terrible for the residents living in the Croke Park area with this whole Garth Brooks saga. There clearly wasn’t permission for five concerts and tickets were sold for two concerts that there wasn’t permission for. This is a rights issue. The rights of the little people like myself. A small group of people up against some government pressure, businesses looking for the money which will come if the event is staged and Garth Brooks and the promotion staff hoping that the laws which are there will be overridden for him to play the five shows.

Yes there is a big windfall coming into the country if the concerts go ahead but I don’t really care. I don’t believe in selling out on the people like myself simply because I don’t live in the area for any windfall.

Of course I feel sorry for the people who were looking forward to the night out but I don’t believe in walking over peoples’ rights. If these concerts are all granted where will it end? Will big stars get ten nights in a row next?

I do feel that our reputation has been tarnished a bit in the concert realm. But it isn’t the residents I blame for that. The rules were clearly in place before the tickets were sold and them two shows should never have been sold. Hopes of many Garth Brooks fans should not have been raised when the planning permission wasn’t there for the two shows.