Kyran and Nina left the show this week!

Ray and Maria were amazing their skate together and Ray shone getting the full 40 marks for his individual skate to Prince’s Kiss. He included some snake hip moves that got Jason (and me) hot under the collar. 🙂

Hard luck Kyran and Vicky but well done on doing so well. You were brilliant on the show! 🙂 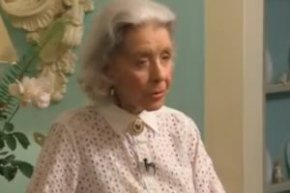 This fabulous 95-year-old woman Marsha Hunt has wrote a song called “Here’s To All Who Love” which is a love song  about love, acceptance and marriage equality. It is a song for changing times. The song is sung by Bill A. Jones from Glee.

Last weekend I watched Celtic goalkeeper Fraser Forster equal the clean sheet record in the Scottish League and today I was delighted to read that he had beaten the 43-year-old record previously held by Bobby Clark of Aberdeen whose record was 1155 minutes. Forster needed 31 minutes to claim the record.

Celtic won the match 2-0. Well done Fraser! Brilliant and well deserved! So happy for you! 🙂 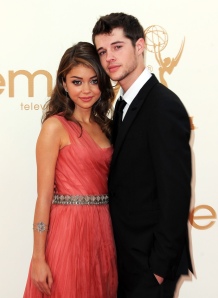 Sarah with her boyfriend Matt

23-year-old Modern Family and Struck By Lightening actress Sarah Hyland was indecently assaulted by a fan. Police have charged a 29-year-old man with assaulting her outside a party for cast members at a Sydney hotel on Thursday night. Hyland was allegedly groped on the chest by a man who had asked her to pose for a photograph and she instantly brought the matter to the attention of private security guards, who called police to the scene.

Hyland was shaken by the incident naturally and left the event early.

“Sorry to all the fans outside the #qantas event that I didn’t get to say hi to but I had to leave due to an inappropriate touch of a fan,” she wrote on her Twitter page.

Her boyfriend actor Matt Prokop who went with her to Australia tweeted on his Twitter page: “To the [expletive] who assaulted Sarah tonight I hope to God you don’t see next week.”

The man was charged with assault with an act of indecency which carries a potential maximum of five years in prison. He was freed on bail and will appear in a Sydney court on March 14. Police have not let out his name.

Last night I watched Blue Valentine starring Ryan Gosling and Michelle Williams and directed and written by Derek Cianfrance. It is a film which was 12 years in gestation. The film splits between two time frames when Williams’ character Cindy and Gosling’s character Dean meet and ultimately the end of their relationship.

It was a brave and different movie to make and that has to be commended but as much as I’m all up for something different. I love original scripts, different also has to be good different and Blue Valentine didn’t really hold my interest. I found it a little dull. That doesn’t take away from the performances in it. Everyone acted their parts amazingly especially Williams and Gosling in the main roles and in a lot of their fight scenes it would take excellent acting to pull them off.

There was a few sexy moments in it. Michelle was quite lucky even though it was just acting. Hot Ryan Gosling and the very sexy Mike Vogel (Bobby) in one movie. Oh and the very handsome Ben Shenkman after her as Sam Feinberg. Happy days indeed! 🙂

It will be a film to some peoples’ tastes but it just wasn’t to mine. 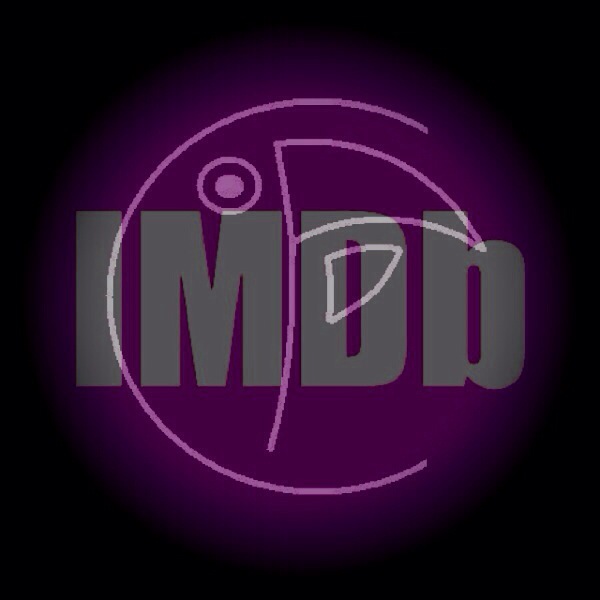 For today’s IMDB Top 250 guest review, we have Lisa of Culturevultureexpress. Lisa got very excited about my IMDB Top 250 project and immediately grabbed a bunch of excellent films to review. Thanks again for joining in, Lisa! 🙂

There are still some movies up for grabs if anyone wants to do a guest IMDB Top 250 review. You can find the list HERE.

Now over to Lisa to see what she has to say about The Usual Suspects, IMDB rank 26 out of 250…

The Usual Suspects was a 1995 slick, intense and perfect crime-thriller. With an All-Star cast which included Kevin Spacey, Gabriel Bryne, Chazz Palminteri and Pete Postlethwaite, the plot, written by the amazingly talented Christopher McQuarrie, was dramatic as it meandered its way through deceit and mystery.

Directed by Bryan Singer, the film centres around Roger “Verbal” Kint, a cripple, and his… 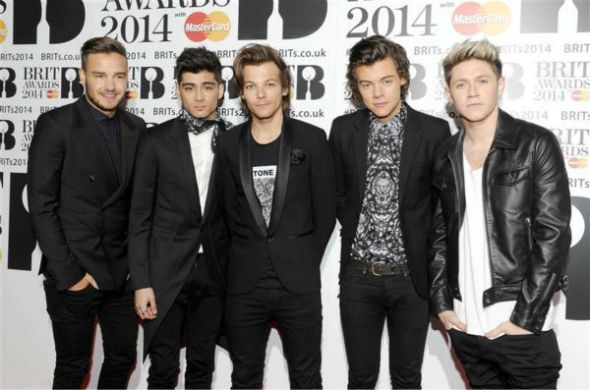 Last night’s Brit Awards saw Arctic Monkeys and One Direction emerge as the big winners with both acts winning two accolades each at London’s O2 Arena.

Kate Moss wore one of David Bowie’s Ziggy Stardust playsuits to accept the award on his behalf for British Male Artist.

The four finalists our very own Keith Duffy, Richard Whitehead, Dan Osborne and Perri Kiely did an individual dive before doing a dive with show mentor Tom Daley. Perri really excelled at both and was a deserving winner. The lads from Diversity were there to cheer him on and celebrate when he won.

Tom lifts Perri up after his win!

There was also a historic, fab moment when Whitehead and Daley did their dive together. It was the first time an Olympian and a Paralympian had dived together on TV. 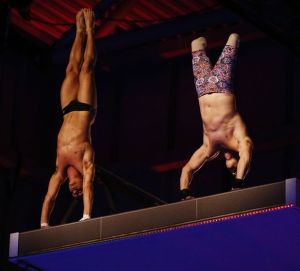 The historic moment when Richard and Tom Dived together.

Patriotic Keith wore diving trunks with the Irish flag on them while Dan donned some sparkley ones and looked sexy as always. When he and Daley, who wore a sexy black pair, did their dive together I thought I was in heaven! Now that is good Saturday night television! Two fit guys with barely anything on! Thank you very much ITV! Happy days! 🙂

There was also a fantastic performance of Diamonds Are A Girl’s Best Friend by the professional divers including Tom who ended the performance by doing a split into the pool.

It was a great final and well done Perri! Well deserved! 🙂

Here is the final part of my fanfic The Strength of Our Love. Hope you enjoy! 🙂

Title: The Strength of Our Love

Disclaimer: I don’t know Union J and I’m not saying anything about their real sexualities. What I’m writing is complete fiction. 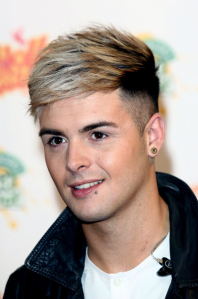 Standing outside the tour bus George waited for Jaymi to arrive. He couldn’t wait to spend his first day both dating and working with Jaymi since they had signed their record contract. Jaymi soon arrived looking snazzy in Topman clothes and urban style runners.
“You look amazing.”, George smiled.
“So do you babe.”
“I’m just wearing a t-shirt and jeans.”
“Doesn’t matter. You always look amazing.”
They kiss gently.
“So this is the tour bus?”
“Yeah.”
“Can you believe it George?! An actual tour bus?!”, Jaymi said excitedly.
“Yeah. I seen something like that in our contract after all!”, George smiled.
Jaymi rolled his eyes and grinned.
“You know what I mean Smarty Pants!”
“Yeah. I love you Jaymi.”
“I love you too George.”
They kiss again. Josh and JJ come along.
“Oh you two get a room!”, Josh smiles and George and Jaymi smile and the four of them get on the tour bus.

I hope you all enjoyed it! 🙂

Sir Tom Finney has died, aged 91. May he rest in peace.

Football legend Sir Tom Finney has died at the age of 91. The star spent his whole career with Preston North End and was nicknamed the Preston Plumber, a nickname he got from his father who insisted he learn the family trade as an apprentice before turning pro. .

He won 76 caps and scored 30 goals for England while the winger scored 210 goals for Preston and was Footballer of the Year in 1954 and 1957 becoming the first person to land the award twice.

He was knighted in 1998 and was England’s oldest living international before his death.

Gary Lineker was one of the people who paid tribute to the former footballer on his Twitter page saying,

“Sir Tom Finney has left us. One of the greatest players this country has ever seen, and a true gentleman. #RIP.”

Preston North End said the club had found out about the “extremely sad news” of the legend’s death and said in a statement of their long-serving player: “Sir Tom was the greatest player to ever play for Preston North End and one of the all time greats for England. The thoughts of everyone at the Club, and those connected with it, are with his family at this time.”

He is survived by his two children, Brian and Barbara, from his marriage to Elsie Noblett, who died from Alzheimer’s in 2004.

My condolences are with all his loved ones at this sad time especially his two children. May he rest in peace.

14,433 spam blocked by Akismet
culturevultureexpress
Create a free website or blog at WordPress.com.