Just realised that my World Cup crush James Rodriguez is married and they have a daughter. Such a sweet couple. Such a sweet family. Now will have to be on the look-out for another single hottie. Hehe. 🙂

Rodriguez secured the World Cup Golden Boot with six goals after full time ended in the final and the 22-year-old was filmed celebrating his win with his family. Thomas Muller and Lionel Messi who were in contention failed to catch up with his goal tally.

With an assist by fellow sub 23-year-old (And my fellow 1990s’ person! Always love to see a 1990s’ person doing well!) Chelsea’s André Schürrle, Götze volleyed home one of the goals of the tournament this year with amazing skill and great composure under all that pressure and looked positively dazed by the fact that he was Germany’s hero ensuring their win of the title against Argentina, their first win as Germany as opposed to West Germany and the first win by a European team of the World Cup in South America.

“It’s an unbelievable feeling. You score the goal and you don’t really know what’s happening. It hasn’t been a simple tournament, or year, for me and I owe a lot to my family and my girlfriend who always believed in me. But a dream became reality here.”

“I said to Götze: ‘OK, show the world you are better than Messi and can decide the World Cup,’” said Löw. “I told him that. I always had a good feeling about Götze. Argentina were becoming more and more tired, but we had players who could make a difference. Götze is a miracle boy, a boy wonder. He can play any position up front. I know he’s always able to decide a match, and it was a great winner he scored. But in extra time we had the energy to move forward. We didn’t want to go to penalties. We wanted the game decided before then, and we put them under more pressure.”

We have reached the quarter-finals of the World Cup once again and below I have given my top three tips for World Cup glory from what I have saw so far in the tournament of ups and downs and perfect goals:

This Belgian side is currently priced at 20/1 to take the title and with a well-rounded squad consisting of Eden Hazard, Divock Origi, Dries Mertens, Kevin De Bruyne, Kevin Mirallas and Jan Vertonghen they look a team with the portential to be the next big thing in football.

Columbia have a new star striker in James Rodriguez and are playing amazingly. The definite dark horse of the tournament.

The unluckiest team ever in the World Cup history, The Netherlands fought hard to stay in this year’s tournament with a 2-1 win with two late goals against Mexico in the last 16. A real chance this year.

Football fever is in full swing in Brazil and I’m enjoying the tournament massively – for two reasons! The talent and the talent darling! As well as brilliant football skill the tournament has been jam-packed with plenty of fit men for our viewing pleasure ladies and gents and I have (enjoyed) compiling a list of the ten hottest men playing in the tournament or who have played in the tournament. Enjoy, enjoy, enjoy darlings! 🙂 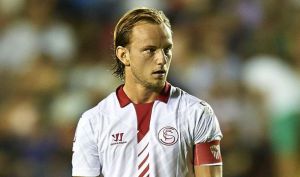 The very beautiful Ivan Rakitic has completely stolen my heart with his gorgeousness, gorgeous smile and taking his shorts down outside the dressing-room. The 26-year-old midfielder who plays for Croatia and plays his club football currently for Sevilla FC is a stunning little blonde. Absolutely gorgeous. Sadly he left after Croatia were eliminated in Group A where Brazil and Mexico advanced to the next stage.

Colombia’s James Rodriguez is such a babe! Have you seen him in his white shirt and elegant black trousers getting off the team bus. Wow! The 22-year-old who plays his club matches for Monaco has been a revelation in Group C and we can look forward to seeing more of this stunning man as Colombia have advance into the last 16.

Potugal’s captain Cristiano Ronaldo is always a very hot attraction in any football tournament and this world cup is no exception for the 29-year-old who plays his club football at Real Madrid. Although he is not quite physically fit (get well soon Cristiano) he is certainly fit in every other way and helps hope Portugal advance so that we can see more of him in the tournament! 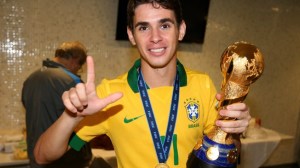 I have always liked Brazilian men very much! Oh yes! And Oscar is such a fit guy! The 22-year-old who plays his club football for Chelsea is looking fit in his attacking midfielder role and has progressed to the last 16 with the host nation.

I have had a long-term crush on the very handsome Tim Cahill from Australia. The 34-year-old former Everton star is now playing his football in America with the New York Red Bulls and this has been Tim Cahill’s last world cup. Australia went out in the group stages but who can forget his incredible goal against The Netherlands.

Another long-term crush in the handsome form of 33-year-old Spanish goalkeeper Iker Casillas! What an absolute babe! The star who plays his club football for Real Madrid also was participating in his final World Cup and went out in the group stages with former World Cup winners Spain.

I am a Liverpool supporter and I have had a crush on 32-year-old Xavi since he was at Liverpool and age doesn’t seem to be hindering his beauty. Not one bit honey! Sadly Xavi, who plays his club football for Real Madrid, also went out in the group stages with current holders Spain. 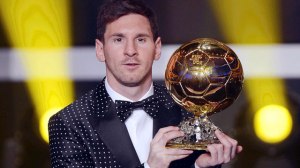 27-year-old Lionel Messi, who plays his club matches for Barcelona, has made it out of the group stages with Argentina. The gorgeous hunk has already scored two goals including an amazing goal against Iran to secure a win in the 96th minute. I was a bit sad for Iran though.

Switzerland Striker Admir Mehmedi SC Freiburg has been quite good in a Swiss side that really is not performing well. The 23-year-old is as smoking red hot as his red Swiss jersey if not more so. Just such a beautiful man. Makes the Swiss team more than bearable to watch!

I said I liked Brazilian men and 29-year-old Thiago Silva (Who really does not look his age!) is a beaut! The star, who plays for Paris Saint-Germain in terms of his club football, is through to the next phase with the host nation and aren’t we very, very glad that he is?!

Well hope you all enjoyed that darlings! I know I certainly did! Comment below with your favourite hotties! These guys are just my personal taste and I know there is many more hotties gracing the Brazilian pitches so let me know your thoughts! 🙂