The Circle of Thread

Life is too short to not live in the moment, to not embrace those you love, to forget to laugh aplenty.

The thread we cling to is too thin to not feel enough, to feel superior, to forget to keep the ego balanced.

Life is too short to not say what you feel, to try to be liked at the sacrifice of your voice so talk, write, create aplenty.

Before the thread snaps live life your way. Unleash the shackles. Release the core of your heart. Your emotions are what make you human. Never be afraid of them. 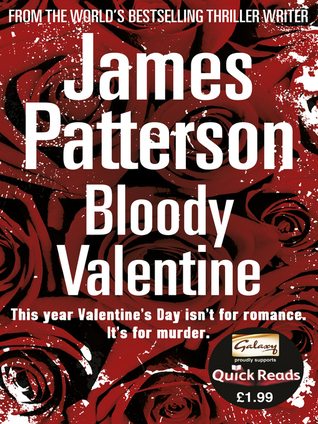 Bloody Valentine (2011) by James Patterson is a great short read.

It’s murder at Valentine’s. Jack Barnes is an affluent owner of a restaurant. When his chef Bruno Gambirrni and his wife Zee is murdered, Jack becomes a prime suspect for their murders. But is all as it seems?

The setting for this book is Jack’s block of flats. This makes for a very claustrophobic situation which always works well for a murder mystery. Agatha Christie was the queen of the claustrophobic setting in numerous novels such as Murder on the Orient Express and Murder on the Nile. Patterson proves he is the king of this murder mystery device here. There is a great array of characters with well-rounded backstories which add to the overall plot. Throughout the story we meet Michael and Ammi- Jack’s younger brother and his girlfriend who are artists and Leila- Jack’s older sister and Mamie- the youngest family member who has Down Syndrome. Leila is Mamie’s carer. We meet Bruno Gambirrni who is the Senior Chef at Jack’s restaurant and Bruno’s Sous Chef and boyfriend Adrian Wills as well meeting the night porter Damien Clark and Ted Levett.

The book is a Galaxy Quick read coming in at just over 120 pages so the action occurs at a very fast pace and you find yourself turning the pages very quickly. I actually sat down to read a few chapters and ended up finishing the book in one night. Full of intensity and interest, everything is very well-described and plotted excellently.

To purchase Bloody Valentine by James Patterson go to:

And for more about James Patterson and his book go to:

My short story entitled Lee is in Woman’s Way this week. The magazine is on sale from today. It is quite an emotional read and I did cry writing it. It follows the story of the main character Lee Carrigan who is a young writer and LGBTQ+ and cancer activist who has been diagnosed with terminal cancer and it tells the story of his last few months of life. Lee and all the rest of the characters I loved writing like Lee’s boyfriend Mark, Lee’s mother, his little brother Dane, his friend Kate and Mark’s father.

It’s a story of living in the moment, spending time with those you love and doing all the things you want to do today because tomorrow is not guaranteed.

As always my thanks go to the team at Woman’s Way for featuring the story and as always the illustrations that accompany the story are simply perfect. The book and the pen really capture the character of Lee so well.

If you choose to read it, you can find the story on page 41 and thank you in advance.

In the 1960s and 1970s Doris and Len regularly played the piano for the shoppers who walked by. They would play and sing a variety of old love songs. They were lost in each other’s eyes sandwiched between the sweet shop and the chipper with the hairdressers overlooking them. Today the buildings have changed, some have closed down long ago. But their piano remains. A reminder for all of that cute little married couple who once played there. Sometimes Doris comes down, puts flowers on the piano, remembers her sweet Len and walks away humming his favourite tunes.

Each day Frankie shined his motorbike. It was his pride and joy. His parents were just glad he had an interest in something. They wished he wouldn’t keep throwing in job after job and go back on the drugs with those friends of his.

At 1am at night, he took the bike out, crashed, died.

The papers reported it as a tragic accident by a speeding 24-year-old male. Only Fr. Williams knew what he had did to a young alter boy many years ago while he told the news it was a tragic day for the whole community.

The Girl on the Train (2015) by Paula Hawkins is a splendidly intriguing mystery.

The novel follows three women Rachel, Anna and Megan and is told from each of their points of view. Rachel is watching a couple on her train journey each day called Megan and Scott but she is imagining their lives totally different from how their actual life is. They live near her ex Tom and his new love Anna and their little daughter Evie so Rachel has a reminder each day that she lost Tom to Anna as well. But then Megan goes missing and is feared dead and Rachel has witnessed from the train her kissing another man that isn’t Scott prior to her disappearance.

This is wonderfully psychological and mysterious. When you start reading the pages seem to fly by. I loved this book and my Mum did too. The two of us found it hard to put down. There is so many layers to this book and the different perspectives help to confuse the reader over and over about what happened to Megan. The writing in this is stunning and descriptive. Another aspect of this book which is interesting besides the mystery is the way many of the characters look at each other’s lives and completely get the wrong end of the stick about how happy or unhappy each other is in their life or the motives behind another character’s actions. Rachel especially is interesting in this aspect. She is very unhappy in her own life about not being able to give birth to a child and her break-up with Tom and how much her prospects in so many areas of her life look bleak to her and through that unhappiness she manages to convince herself that Megan and Scott (or Jess and Jason as she calls them in the fantasy dream-like life she has created for them) are so gloriously happy. In a way it feels like through them she is creating an image of the life she wishes she had with Tom.

It is a book that you find hard to put down so it’s not surprising that it was the fastest-selling adult hardcover novel in book history in 2015 or that it spent over four months on the New York Times Bestseller List after its release. This book has mystery, human emotions and the mundane of life covered perfectly and the whole idea that life is what you make of it. It also speaks about some very important issues like alcohol dependency, domestic abuse and drug dependency very authentically and with wonderful sensitivity. The ending is also rather surprising which is always good for a mystery.

To purchase The Girl on the Train by Paula Hawkins go to:

And for more on Paula Hawkins and her work go to: