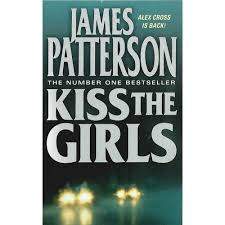 Kiss The Girls (1995) by James Patterson is the second book in the author’s Alex Cross series following on from Along Came A Spider.

In the book, Cross’ niece Naomi has been kidnapped by two violent serial killers who have abducted many other young women. Cross begins to solve the mystery in order to save Naomi and the other women. In the process he begins to realize that the killers known by the names Casanova and the Gentleman Caller are picking women they see as exceptional and special. A college murder of a heterosexual/heteroromantic couple from many years ago provides some clues and a similar incident where the man is killed and the woman kidnapped present a possible link to Cross to research who the people are behind all the evil happening. In the course of the book, Cross meets one of the victims of these two men Kate McTiernan, a medical student, who has escaped from the house the women are been kept hostage in and the two begin to feel romantic and sexual feelings for each other. Along with the other women, he now has two major reasons in Naomi and Kate to track down these two killers.

I love the way Patterson has written the women who are abducted in this book. They aren’t written as damsels but neither are they written without fear. They feel very real and human and easy to relate to even though their circumstances in this book wouldn’t be easy for everyone to relate to. It never feels like Patterson is maintaining that big strong man Alex Cross is going to come in and save these helpless souls like the troupe so many books use. It feels more like they in part save themselves and then Alex comes in and saves them too because help is always great when you’re in danger. So I really liked the dynamic in the way Patterson wrote that.

It is like all Patterson books I’ve read, a page-turner. You are intrigued to know what is going to happen in each chapter and the reaveal of Casanova wasn’t obvious. Let’s put it this way, I was going in the right direction but the wrong person. We don’t have much suspense with the Gentleman Caller as his identity is revealed midway through the book but it was interesting trying to figure out who he was working with.

To purchase Kiss The Girls by James Patterson go to:

And for more on James Patterson and his work go to: