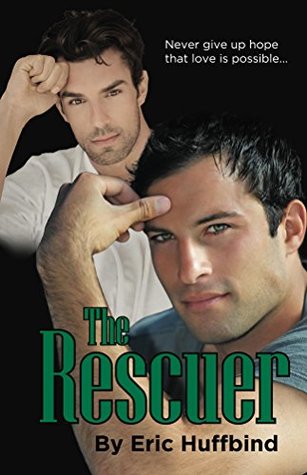 The Rescuer (2017) by Eric Huffbind is a wonderfully romantic and very beautiful novel.

The novel, which is the debut novel by the author, follows the story of Christopter Parker and Jason Calhoun. Christopher books into Watermeadow Rehabilitation Center and at this time he is at his lowest ebb trying to recreate a future for himself after getting hooked on alcohol in a midst of figures in his life letting him down and depression setting in in his life. There he meets Jason who is his social worker and feelings begin to simmer beneath the surface while they both maintain the professional agreement between them both.

In a way they become each other’s rescuer throughout the book. Although Jason is Christopher’s official rescuer from his depths of his despair and he expresses how he has often being attracted to the role of rescuer, it seems to me as a reader that they rescued each other from loneliness and a lack of trust in men and finding their perfect prince. Oh, it’s so gorgeously romantic!

This book touches on so many important issues. Depression is so close to my heart as people I have loved dearly have been affected by it and I commend the author for tackling this issue in such an authentic and compassionate way. Although I have never experienced depression from a first person perspective, I felt Christopher’s story and how he felt resembled very closely the feelings of pain and hopelessness that people who experience depression feel. The writer didn’t go for either the ‘Christopher can handle this completely’ or the ‘Christopher couldn’t handle it at all’ approach and somewhere in that gray place from my outside place is the truth of someone suffering from depression. He could get through but he needed Jason to not judge and to believe in him and his progress. Another very important topic dealt with in this book is the area of people selling themselves and their bodies to get on and make their lives better. There is often so much judgement in this aspect. Look being straight with you all, I don’t agree with it. Maybe I’m a bit old school that way. But judging a person for selling their body and saying I wouldn’t do it is two different things. I do understand that we are all different and we respond to situations where someone else is in power in very different ways. Christopher sold his body in this book to Sam Barron who is quite a nasty piece of work. Possibly by the end, he has a heart but I don’t want to give too much away. But in the early stages he did use his power and it contributes, among other things, to the situation Christopher finds himself in when he arrives at Watermeadow. I found myself as a reader quite protective of Christopher. I know that countless people have found themselves in situations where they feel their bodies are the only currency to offer even though they have so much more to offer the world. And yes, it warmed my heart greatly that Jason could see he had so many qualities to offer and encouraged him to do that. Just as a last word on that topic, I think it is someone’s free will to sell their body if they want to. It’s their body to do what they wish with. And it’s also their free will to not like doing so and feel guilt about doing so which I equally respect. The part which affected me, in a thought-provoking way, was the way the power games were at play. The fact that Christopher felt pressurised into this by so many aspects of his life and especially by Sam. How many people, especially younger people, feel this in so many different situations?

Without giving too much away this book also deals with suicide. There is a situation in Christopher’s past which brings this topic up. Obviously it’s a topic which many people face and is often, like the situation in the book shows, brought on by the perception other  people have and pure fear one has about what people will think and what will happen from there. If you are out there and you read this, no matter what, you are valued and please, please keep strong.

The book also deals with prejudice and highlights many of the issues faced in and out of work people face for being a sexuality other than straight. Being pansexual, I could totally understand the strain put on people who don’t conform to the straight narrative. One thing that is highlighted is that assumptive nature of assuming someone is straight before you know. I think the author highlighted very well the heteronormativity and heterosexism at play in our society. Susan, while sweet in many aspects, I didn’t like because she seemed happy enough to display this kind of prejudice and felt nothing about it. Mr. Branson did display it but he apologised. Christopher was recovering from his own self-confidence issues so I think the scene where he admits to Mr. Branson that he has a boyfriend is written very realistically. He hasn’t quite got to the stage where he can accept the man is apologising for reacting in a prejudiced asshole way. We all have things we aren’t proud of and I hoped Christopher would let the man ease his mind of his guilt about his cruelness. My hope for Christopher is that further along his journey he could say ‘That’s cool. Thanks for your apology. Much appreciated.’ instead of pampering and saying it was understandable. But I understood he wasn’t quite there yet and he was still thinking of straight as superior. As him an and Jason are around my age I just can’t see him responding the way he did without feeling like that. Can happen as we’re all different but it’s rare. And if someone usually does, they don’t usually in our generation believe what they are saying. But he seemed to so I think it was because he still had a few issues he had to resolve. And I was like babe, be yourself. Don’t be scared to be honest. Go further on your journey. You have come so far.

Now, this book hits on so many important things but it also has so much romance, so much backstory for the main characters, so many fun. I loved George. I could relate a lot to Nurse Judy and in parts to both the main characters. I found myself very much rooting for Christopher and Jason which is always a great sign for a romance. They seemed so well suited and what each other needed. I loved that Jason wasn’t this totally together social worker and that he had his own issues in his life. I lost my father at 18 and Jason lost his father at 17 in the story. My Dad died of heart trouble so the circumstances are tremendously different but what I could relate to was the feeling of losing your Dad so young and the effect it has on your life and when I read it, I will say it made me almost quite emotional. Not too often do you read in fiction about someone losing their Dad around that age. It’s often as a child or older than your teens and I give kudos to the author for addressing the feelings of losing your Dad at a point in your life when you are transferring from teen years to adulthood. I give kudos also for not making Jason into a caricature that he is perfect with no hurt in his life as social worker or not, we all do.

I think this is a stunning book with so much heart. The two main characters drive on a gorgeous story of love and the fight to be with the person you love. The writer is extremely talented. There is a bit of everything in this book. And a message that love is the most important thing in the world. I loved it. A must read.

To purchase The Rescuer by Eric Huffbind go to:

For more information about Eric Huffbind and his work go to:

One comment on “The Rescuer By Eric Huffbind Review!”