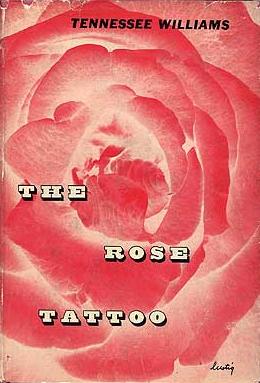 The Rose Tattoo (1951) by Tennessee Williams is a wonderful play by the author.

The play follows the story of the protagonist Serafina Delle Rose. She is an Italian woman and a seamstress who lives in a Sicilian community in Louisiana. She is pregnant and also has a daughter Rosa. She loves her husband Rosario to bits but Rosario is not what he seems. He is having an affair with a local woman Estelle and is a smuggler. After he is shot and killed by police, Serafina overhears some women who are neighbours discussing how they will break the news to her and her grief begins.

Her own past pain, because though she loved Rosario with all her heart she knew his faults even though she was in denial, also comes in her negative feelings when three years later Rosa meets a guy she loves called Jack. I also think the negative feelings are because she fears if Jack died, Rosa would go through the same pain she did. So it’s protective but it’s also stopping her daughter from happiness and Serafina does not communicate very well her fears through whatever. Pride? Fear to be honest about it? An I’m the Mother and I don’t have to explain myself attitude. Whatever the reason or reasons, her communication skills with her daughter are lacking severely which is unfair to Rosa. Williams brings many topics into this story such as family dynamics, immigration, sexuality and romantic feelings, communication issues, finding your place in the world, grief and mental illness.

I think it is an amazing play. I was engrossed in the characters and the plot from start to finish. The writing is gorgeously down-to-earth and the dialogue, which is especially the heart of a play, is amazing, spot-on and realistic. Williams didn’t stereotype the characters which was wonderful but not surprising either considering his boyfriend Frank Merlo was a Sicilian-American man from Louisiana and the play is based a lot on Merlo’s family history and background. The play is also dedicated to Merlo.

Beautifully written. Amazing job. A must-read. I loved it! 🙂

To purchase The Rose Tattoo by Tennessee Williams go to: