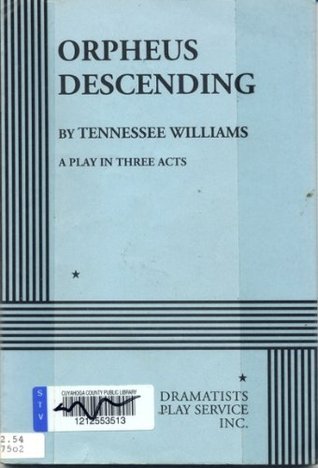 Orpheus Descending (1957) by Tennessee Williams is the author’s take on a contemporary version of the legend of Orpheus and Eurydice.

This play took Williams seventeen years to write. Whoa, I know! So he was definitely extremely dedicated to this work. It is an amazing write and it is clear that a lot of work went into it. Set in a southern small town in America in the 1950s, the play takes place in a dry goods shop. It follows the romance of Val Xavier, a musician, who begins working at the shop and Lady Torrance who runs the shop. She has a husband Jabe Torrance who is dying. She begins an affair with Val and becomes pregnant. Carol, another woman in the town, is after Val too but he rejects her.

Lady feels trapped in her life. She sees freedom in Val and he makes her happier than she has been in a while but the story is not quite as simple as that. Lady finds out that her husband killed her father in the past because he was angered by her father creating businesses with black people. She plans to leave the town with Val but Jabe has other plans.

I love the chemistry between Val and Lady. I spent so much of this play rooting for them to be together forever. I found their relationship really beautiful and they seemed meant to be. The longing was intense. I was hoping all the time that they could get out of the town and start a new life together.

This play deals with many important topics. Racism is highlighted in the play. As previously mentioned, Lady’s husband killed her father because he worked with black people. There is also many other racists in the play who use racist language and Carol says she was supportive of a black man called Willie McGee who was sent to the chair for being with a white woman. The reference is to a real-life case in which a man called Willie McGee was sent to the chair after a white woman accused him of rape. He said they had been in a relationship for many years and that she accused him when he split up with her.

Attitudes to sexual relationships outside of wedlock is also highlighted. Lady is condemned by many in the town for having a sexual relationship with a man called David Cutrere before she married Jabe. Heaven knows what they would make of her sexual affair with Val!

The small-town vibe of conformity, narrow-mindedness and talking behind everyone’s backs is very well-written by Williams. The claustrophobic atmosphere is well depicted. Williams also shows that not everyone in the town is like this through Val, Lady and Carol. I was very fond of those three characters and thought it would be great if they were running the town!

I adored the play. It was amazing. It had romance, drama, tension and hard-hitting issues. Fantastic job. A must-read.

To purchase Orpheus Descending (which is in this collection) by Tennessee Williams go to: