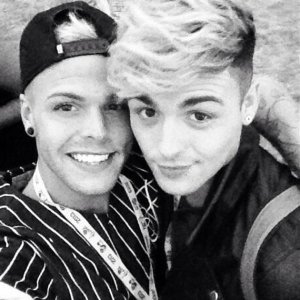 Jaymi has spoke about his relationship with Olly.

Union J’s Jaymi Hensley has revealed that meeting his fiancé Olly Marmon stopped his seven week dating curse after the pair met when they were both 18. He admits that he didn’t have the greatest luck with dating before they met saying to Guilty Pleasures at the London Lesbian and Gay Switchboard 40th anniversary gala at The Waldorf Hilton, London’s Palm Court, supported by Patron Tequila, “All my relationships ended after seven weeks before I met Olly. So it was like a seven week curse! But then I met the one and now it’s hundreds of weeks later. I think we were really lucky and we found each other. We understand each other and like the same things. Our personalities really match. We are really lucky to have found this relationship.”

Admitting that he is a bit of a perfectionist, he says he will be on alert on their wedding day to make sure no relatives show up wearing garishly coloured outfits.

‘I am a perfectionist and my worst thing is colour schemes. I’m really worried my aunt will turn up in lime green and my cousin will turn up in orange and everyone will look like a living sweet shop,’ he laughed.

‘There are certain colours I can’t let people wear! There’s nothing worse than you’ve got your wedding photo and everyone looks lush and then there’s someone in an awful coloured hat or dress.’