On the 18th of September, Culture Night took place. Here is 5 amazing poems to celebrate the event. Enjoy! 🙂

Her Voice by Oscar Wilde

Mother To Son by Langston Hughes 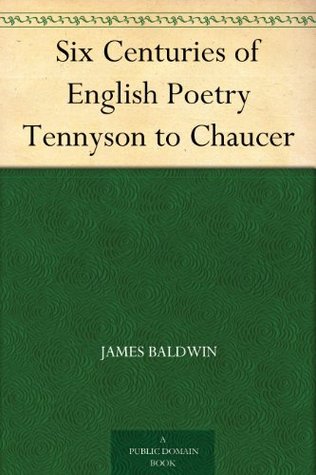 Six Centuries of English Poetry: Tennyson to Chaucer (1892) by James Baldwin is a wonderful collection of poetry by many poets of the past.

This collection includes many poets including William Wordsworth, Samuel Coleridge, Robbie Burns, John Keats, Alexander Pope, John Skelton, William Shakespeare, William Cowper, Percy Shelly, Geoffrey Chaucer and Alfred, Lord Tennyson among others. The book has poems and parts of poems and goes in a backwards order starting at the 19th century. There is notes to explain words and parts accompanying many poems which is very helpful and interesting biographical information about each poet who is included in the book. There is also a section on ballads which was very interesting and entertaining. It is a wonderful overview of many amazing poets, the times they wrote in and their work. The book certainly encouraged me to read more work in the future by a lot of these poets. I loved reading about the biographies and seeing the different perspectives the poets wrote from. That was really interesting.

There is downsides to the book. It isn’t very diverse in the choice of poets and therefore doesn’t show ideas or the times from a lot of different perspectives. There is also a certain amount of classism in this book and is present in Robbie Burns’ biography with some of the language used.

A really great read but definitely has problematic elements.

To get your free copy of Six Centuries of English Poetry: Tennyson to Chaucer by James Baldwin go to:

For more about James Baldwin and his work go to:

Yes y’all, it is that time of week again! Here are some video suggestions to watch this week. 🙂

In this video, author James Baldwin is debating with William F. Buckley Jr. about race issues in America in 1965. A wonderful speech, clearly from the heart in the face of much adversity.

We are in the grips of Covid-19 at the moment. This video speaks of numerous pandemics and viruses which have happened throughout history, some of which lasted/are lasting a very long time.

I love this song and here we see Aretha Franklin blast it out at Rockaplast in 1968. A great performance and great to get a chance to see such a classic performance.

In this performance at Build Series, Wicked star Kristin Chenoweth performs a cover of The Eagles’ Desperado with pronoun changes that make the performance very beautiful. A great cover.

In this episode Ryan and Shane take a look at the mysterious death of a woman who died on her honeymoon. Very interesting watch.

Giovanni’s Room (1956) by James Baldwin is a gorgeously crafted book.

The plot follows the story of the narrator David and the title character Giovanni and their love story. David has proposed to Hella but then she leaves him and goes to Spain and that’s when he meets Giovanni. Giovanni’s boss Guillaume, later former boss, is a sexual harasser and has sexual feelings for Giovanni. He fires Giovanni in the book and when Giovanni goes to get his job back he murders Guillaume and is sentenced to death. David, who by this stage has broken up with Giovanni and went back to Hella, imagines that when he went to get his job back he slept with Guillaume in order to do so but then Guillaume decided not to give him the job back. Though this is never confirmed to have been what happened, I think it was Baldwin’s way of telling readers how it happened.

My favourite character is Giovanni. His dialogue was fantastic, very natural and he had a lot of spunk which I quite liked too. I think Giovanni and David had good chemistry but I didn’t really like David. He was honest with Giovanni that Hella would one day come back but outside of that his actions weren’t exactly honourable. I felt that he could see that Giovanni was falling for him and he let it happen and didn’t pull away in order to lessen the inevitable blow and crushing feeling to Giovanni when it ended. Giovanni was used a lot in this book and David wasn’t really much different. I felt that he played a very dangerous game with Giovanni’s heart and emotions. It was a game David was strong enough to do but he should have thought about the fact that Giovanni wasn’t. It was dangerous for Giovanni’s mental health to give him the world, let him start believing their love could conquer all and then just like that snatch it away and just move on. It came across to me very cruel. I think Baldwin was brave to write here about sadly a very common thing that happens where one person is very emotionally invested and the other is able to emotionally detach themselves (at least outwardly) very easily. And to someone who is emotionally invested, it would be better to get them used to the idea more in little steps like spending a little more time apart than to suddenly deliver the crushing blow and say done, checked off the list.

Outside of that I wasn’t fond of David’s views on peoples’ preferences that someone who wants a man should only go for traditionally masculine-looking men and that someone who wants a woman should only go for traditionally feminine-looking women and that anything else he couldn’t understand. I was thinking just because someone’s preferences are different to yours doesn’t make them wrong. Although on this latter reason of why I didn’t like David I will say that maybe his thoughts on it are possibly tied into his own internalized feelings about his sexuality and his perception of how this relates in society’s view to his sexuality so if that’s the case I would give him a pass on that one. But it wasn’t clear to me that that was the reason. It doesn’t make much difference because I didn’t like him due his treatment of Giovanni anyway.

It is a book about love but it’s also a book about sexuality and identity. In the book, David is trying to figure out his sexuality. It’s never really clear if he’s gay, bi, pan or any other sexuality where you like guys but he does definitely like guys. Baldwin very honestly writes the feelings of guilt and shame that people very often felt back in those days into David’s story. He also shows the way that is conflicted with the feelings of joy and excitement David feels when he is around Giovanni. I also like the way he wrote the contrast to that in Giovanni who felt no shame or guilt. He, like David, was aware of the danger in society to people knowing (though he sometimes tried to maintain he wasn’t scared about it) but he didn’t feel any feelings of guilt or shame. The contrast in their feelings on this was great because it gave two sides to how people reacted to the same situation they found themselves in. I’m sure there was people who had both of these reactions in the 1950s so I was happy to see both represented in the book.

The writing style is really accessible, really down-to-earth and very natural. The characters are brilliantly written and the plot is pieced together really well. There is also a lot of important issues present in this novel like sexual harassment, playing with  someone’s emotions, internalized or outer prejudice and finding out your sexuality. It is a very brave book to have written in the 1950s and is wonderfully written. Kudos to Baldwin on both counts.

To get your free copy of Giovanni’s Room by James Baldwin go to:

And for more information about James Baldwin and his work go to: