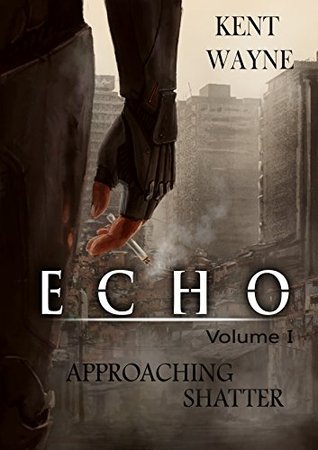 Echo Volume 1: Approaching Shatter by Kent Wayne (2015) is a wonderful and gripping read with excellent descriptive detail. Set in the latter part of the 21st century, humans have left Earth and are now residing on a planet called Echo. 1200 years pass and the citizens living on Echo are being suppressed by society while the authority called the Regime rules over them. A large rebel group called the Dissidents are a source of concern for the police and military. Amongst all the chaos we find the protagonist Atriya, a former enforcer, whose idealist nature is in contrast with the oppression surrounding him.

It is a very action packed novel with detailed observation by the central character. As I read, I was reminded of Tom Rob Smith’s writing. Wayne has that same attention to detail which easily paints a picture of the various locations and characters in your mind as well as making a lot of information a reader needs to know accessible and easy to follow. There’s a lot of fictional military rank structures and Wayne makes it very easy to follow even for readers like me who wouldn’t have clue about how structures of rank work. The story also has an underlying social commentary element to it. You can’t help seeing similarities to our own world with those above and below the law but done in a fictional sci-fi way. It speaks about inequality, power struggles and oppression in society and how people often turn a blind eye to it to advance even though they can see the world is in a state of decay. It also represents in parts how people get socially-conditioned to a certain way of life and can’t understand when people bring up change or progress. Wayne also wonderfully captures the inner turmoil and confusion many people feel about this resistance to change structures and attitudes through the central character and I could definitely relate to that. But my favorite character and the character I identified with the most was Verus. She’s just this ordinary woman but really gutsy and seems to go for what she wants as opposed to what she thinks society wants for her and I hope to see her more in later books of the series.

A very interesting author biography is also included with the story as are the first three chapters of book 2 in the series which looks really good.

All in all, a brilliant read which leaves the reader wanting to see how Atriya’s journey continues and the story progresses in the follow-up novels.

And for more information on Kent Wayne’s work go to:
https://dirtyscifibuddha.com/