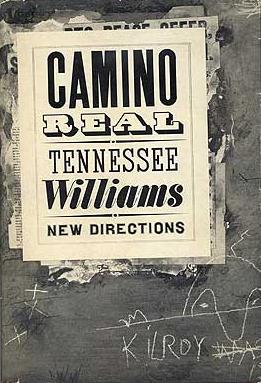 Camino Real (1953) by Tennessee Williams is an interesting play.

I love Tennessee Williams’ work but this was not one of my favourites of his. I liked it but I didn’t really understand it. I would imagine it’s fantastic if I got what it was all about but it was going over my head a lot. But for a play, I didn’t really understand I liked it more than I probably should have. I do love Williams’ style of writing so that might have helped. There was as usual great one-liners and a lot of great dialogue. There was a lot of references which were cool, the holding onto humanism I liked and the poetic nature of the work.

However, it didn’t grab me the way other Williams’ works have. I was confused about what was going on a lot of the time. It didn’t feel as conversational and down-to-earth as other works by the author which I liked better. I appreciated that Williams was doing something different and it probably was good but as I said, I didn’t fully get it. This was Williams’ favourite of his works and he often tried to justify it. I love that he stood up for his baby but I can understand why it wasn’t as successful as his other work. It’s very complex. I would imagine it’s very thought-provoking if a reader understands it and I think many readers who are brighter than me will find this amazing. That’s my gut on that. I mean Williams’ work often has a thought-provoking quality to it and I love that but it is often done in a more down-to-earth style. This as I said is complex but I have a feeling for someone who understands it it could be sensational.

It’s one of those plays if you asked me do I like it?, I would say yes. But if you asked me to explain it, I wouldn’t know where to begin. I would imagine in a production it would be amazing but I think I would be sitting in the theatre confused the house down.

But I still love you Tennessee! 🙂

To purchase Camino Real (which is in this collection) by Tennessee Williams go to: