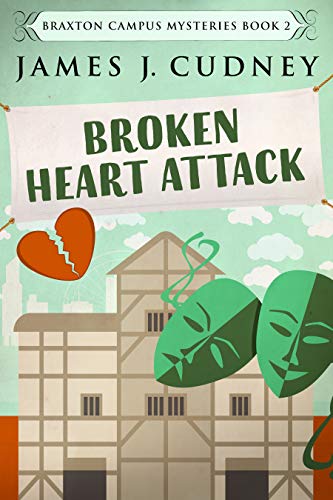 Broken Heart Attack (2018) is the second book in author James J. Cudney’s Braxton Campus Mystery Series. After reading the first book in this series a little while back I have been looking forward to continuing the journey with protagonist Kellan and his grandmother Nana D.

At the beginning of this book, Kellan’s life has changed a lot and he finds himself in a difficult position while trying to do what is best for his young daughter Emma. But soon he is distracted by his grandmother running for office in the town in Pennsylvania and the murder of Gwendolyn Paddington who literally falls into him and dies during Braxton’s production of Shakespeare’s King Lear. Soon it becomes apparent that the older lady has been poisoned after someone or some people put cocaine in her medication. Reluctantly Kellan takes on the case, though he doesn’t like to call them cases, and when he begins looking into what happened to Gwendolyn he puts tremendous effort into getting justice for her and her memory. His search leads him into the lives of the Paddington family where he finds so many suspects that it makes both his and the readers’ heads spin.

My favourite character in this series is Nana D. There is many great characters here with many different personalities who different people will take to. But for me personally I think without her, there would be certainly something missing in the series. She brings great humour and spunk to proceedings and makes me smile every time she enters a scene. Her back-and-forth dialogue with Kellan is very natural and I always enjoy their scenes together. Their relationship is a huge part of this series and it is written brilliantly.

The mystery in this book is filled with intrigue. There is so many people who could have done it and so many twists and turns. I didn’t figure out who the killer/killers were so that’s always great in a mystery. I did find the scene where the killer/killers was found out maybe slightly too easy. The build up to it was great but the actual finding out did feel a little contrived. It felt a little convenient which was a pity. But the overall mystery plot was did very subtly and otherwise it worked very well.

Alongside the mystery in this book there is much romance and some of these romances also have a mystery element to them. Firstly Kellan has three women to choose from. I’m not sure which way Cudney is going to decide in further books in terms of where Kellan’s love life is going but I hope Kellan ends up with the Sheriff April. Their interactions with each other always have a suited quality but also a meeting your match vibe too which I find very enjoyable to read. There is a lot of chemistry there where I don’t feel any chemistry between Kellan and the other two women in his life. The other two romances in this story were tied to the case in some way and one I worked out, the other I didn’t. I found the way the second was so subtly brought together very impressive. But I liked both couples and think they suit beautifully.

A gorgeously written follow-up in this cozy mystery series and I look forward to book 3!

And for more about James J. Cudney and his work go to: