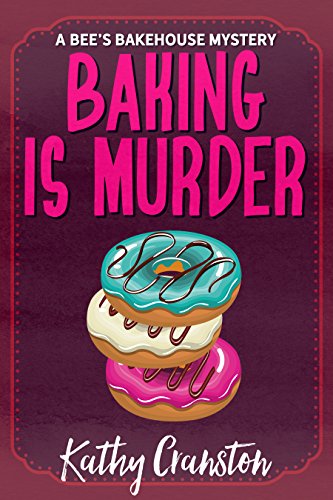 Baking is Murder (2016) by Kathy Cranston is the first book in the author’s Bee’s Bakehouse Mysteries.

In the book, we are introduced to the protagonist and narrator Jessie Henderson. Jessie has recently got divorced from her husband and been let go from her insurance job in New York. She has returned to the small town of Springdale where she grew up to stay and help out in her aunt Bee’s café while she thinks out what to do with her future. She meets a woman called Clarice who is a local dog breeder and becomes an acquaintance of Clarice agreeing to walk her dog Toby for her. But then a fellow dog breeder Lydia is murdered who Clarice recently had an argument with which was a spot of gossip in Springdale. Clarice is arrested for the murder and her future looks bleak. However Jessie is not about to let this woman who she believes to be innocent of the crime end up in prison without a fight. Jessie begins to suspect that animal rights activists are behind the murder of Lydia and the setting up of Clarice.

There is also love possibly on the horizon for Jessie in the form of Mayor Stevens and a continuing romance for her aunt with a mystery man. This added interest to the story. It worked very well and provided some light and fluffy fun which I really enjoyed reading. Jessie’s and aunt Bee’s interactions were fun to read and I liked their relationship.

The idea for this story was very good. But its delivery didn’t always work. The main issue was the character of Jessie. Being honest, I didn’t take to her. And I think for a book to often work for you, you have to like the main character and feel like you are rooting for them. Sure I wanted her to solve the case to get Clarice off if she was innocent but in terms of herself I wasn’t overly pushed. A lot of the issues I felt with Jessie came from the way she was about the animal rights activists especially the head of the protests Kyle. Now I’m all for people debating what they believe in and up to a certain point in the book, I found nothing wrong with her. He had his say. She had her say. But then she went and ruined it by taking the poster out of Jane Waverly’s knitting shop and was too adamant that because someone had a different view to her they were a dangerous, overly angry murderer. What was worse was that I felt she thought she was a great one taking the poster down when in reality what she was doing was stopping Kyle and his fellow protesters from protesting how they wanted to and stopping Jane Waverly (even though her motives for allowing Kyle to put the poster up were shady to say the least) from displaying what she wanted to display in her own shop.

Now there was a few issues with Kyle too. He was protesting on land he shouldn’t have been on but he didn’t get up with a ladder and paint over the sign of her aunt’s shop or break the window or anything. In truth I liked Kyle better than Jessie which doesn’t really work for the story. To make it worse Jessie is 37 and is trying to stop the freedom of speech and expression of a lad years younger than her. This would be alright if she was a character you were meant to dislike but I think she was supposed to be a likable character who everyone was saying had a great heart. In her actions she often came over more as someone who wanted her way and wanted no one else to be allowed to contradict anything that was important to her and those she loved and cared for. She comes over as very bratty and childish often. Lastly she contradicted herself because she said that it was awful that Clarice was arrested just because a fellow dog breeder was murdered because dog breeders don’t just go around murdering each other as they are in competition but didn’t even question her own feelings that a dog breeder is murdered so automatically it’s an animal rights activist as apparently animal rights activists go around killing dog breeders on a regular basis.

As much as I wasn’t fond of Jessie, she has good traits as well. She does love animals and is very good to Toby who is the most adorable, little mischievous pug and agrees to look after Clarice’s dogs for her while she is in custody. Even though it brings out some of her bad traits, she has a good trait in being loyal to those she loves and cares for and always looks out for them. She shows a very caring side especially to her aunt Bee who it is obvious she loves very much and vice versa. She also put herself in the firing line to help a woman she didn’t know well which was kind and admirable.

The author captured the small town atmosphere very well. The way everyone knows your business, knows everyone and knows someone in your family is very authentic. There was also many characters that are staples of small towns in it like the local cop, the local woman in the café, the gossip, the Mayor and the cankerous older lady. I love the setting for the book and thought it was realistically written. It was a very good setting for a murder to take place in as everyone knew something about Lydia and could give Jessie pieces of the jigsaw to put together.

I didn’t love the book but I didn’t dislike it either. I was intrigued to find out who the killer/killers was and loved following the twists and turns that occurred. I also felt that how Jessie figured out who it was in the end was cleverly written and very believable.

To get your free copy of Baking is Murder (Bee’s Bakehouse Mysteries #1) by Kathy Cranston go to:

And to find out more about Kathy Cranston and their work go to: