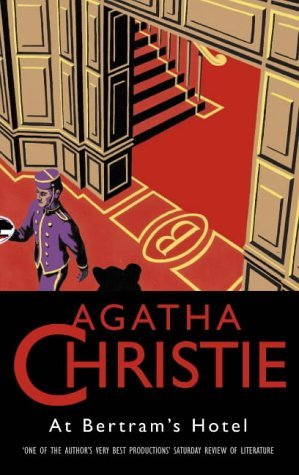 At Bertram’s Hotel (1965) by Agatha Christie is another great mystery book by the author.

This is one of Miss. Marple’s outings. Here, she revisits Bertram’s Hotel where she stayed as a child. But of course Miss. Marple is not going to have a nice, pleasant stay. While she is there, someone is murdered. While Marple is marveling at how the hotel has not changed much, she is thrown into a complex mystery that involves a man Michael “Micky” Gorman who works as a doorman at the hotel been killed. He was killed outside the hotel by a shot that came from inside.

There is a great cast of characters in this book and equally interesting subplots which are used as red herrings for the murder side of the story. I like how it was all weaved together. My only flaw with this is the ending. I did see a dramatization of it once and the ending was better than the ending in the book. The mystery of it worked, the loopholes were tied up but the ending in the book did feel a little contrived and messy which is a pity because the rest of it is great. As I always say, endings of mysteries are hard to do but it was the only flaw I had with the book. Otherwise I found it an intriguing and entertaining read. I found the setting great and I enjoyed the book for the most part.

To purchase At Bertram’s Hotel by Agatha Christie go to:

For more about Agatha Christie and her work go to: