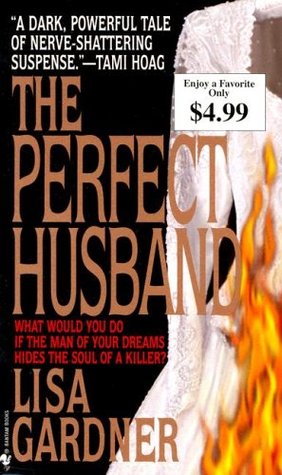 The Perfect Husband (1997) by Lisa Gardner is a thriller/romance.

The plot, which is the first in the author’s Quincy & Rainie series, follows the story of Tess and JT. Tess was married to an abusive husband Jim who is out to kill her and in order to protect her daughter, she has sought out JT to teach her self-defense. That is a good plot idea and I do love romance and mystery so the idea of those two things together should have been good but it didn’t quite work out that way.

I have heard that this author’s later works are much better but for this particular book it was a bit of a miss. There was parts I liked about it such as many important topics being discussed and the idea that JT didn’t simply have to forgive his father because he was his father. I thought the author wrote that debate with JT’s sister Marion and the background of both their stories incredibly well.

But look, there is a lot wrong with this book. Tess goes to JT for help and he hits her around and some of the early sexual encounters were quite dodgy on his part. I liked how Tess was a woman taking control of her destiny which could have been empowering only for the fact JT seemed controlling in his way when she was doing so. It was a pity because there was a lot of background and depth to JT and an opportunity to show the big hard man Marine in a different light to the stereotype but it was an opportunity missed.

To purchase The Perfect Husband by Lisa Gardner go to:

For more about Lisa Gardner and her work go to:

3 comments on “The Perfect Husband By Lisa Gardner Review!”