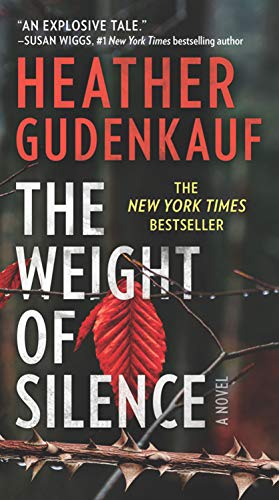 The Weight of Silence (2008) by Heather Gudenkauf is an amazing thriller.

This book was my introduction to this author’s work and boy, oh, boy, does she have talent!

This book follows the disappearance of two young seven-year-old girls Calli Clark and her best friend Petra Gregory. The girls are lost in the woods near their homes in Iowa. Calli has selective mutism after a dramatic experience in her earlier childhood and Petra who speaks becomes like her outer voice. The book is told from the perspective of many people including Calli, her mother Antonia and her brother Ben and Petra’s father Martin. It is soon thought that Calli’s alcoholic father who is also controlling and sneers Calli about her selective mutism is involved. He was the last person who is seen with her on their way over to Petra’s house near the beginning of the book. But is all as it seems?

It is a very interesting read which keeps you turning the pages. Throughout each chapter you gradually learn more about all these characters and all the possible moments of what has led up to this harrowing time. Most of the characters are nice but some are not so. My favourite character was Ben. I liked his spunk and how protective he was of his sister but there is a lot of great characters here. Martin was ok for a while but he tries to beat Ben up later in the novel. Sure, under the circumstances of course I get he was angry but Ben is a child and a grown-up going to beat him up and try to kill him almost was not a good look. There was also an investigator in this who drove me up the wall. He was doing his job but he seemed insensitive. And don’t get me started on Calli’s and Ben’s father – nightmare. I could kind of identify with Antonia. There was a certain amount of things about her which reminded me of myself.

In among the mystery, the author speaks about many important topics such as selective mutism, controlling behavior, alcoholism, bullying, prejudice and family.

It is a very layered book in many ways and has numerous twists and turns. Obviously it is a sad book with the subject matter of two young girls going missing as well. The author packs so much into this book and there is no loopholes. It fits together without any loopholes at the end.

In saying that, my mum and I differ on the ending and that caused many discussions in the aftermath of reading this book, hehe. I believe the killer/s is who was said to be the killer/s before the last section but my mum believes there was a twist in the final section. Who knows which of us is right but it’s a great read nonetheless.

To purchase The Weight of Silence by Heather Gudenkauf go to:

For more about Heather Gudenkauf and her work go to: