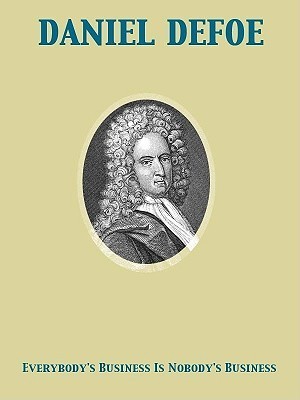 This book is basically Defoe’s opinions on workers and his suggestions for what should be done about the things he perceived as problematic issues in this area. I could not stand this book. I spent half the book trying to find some kind of redeeming quality to it and couldn’t. The only thing I could find redeeming I suppose is that he can write well and it is put together in a writer way.

But as far as the content, it was terrible. He sounded like a bit of a dickhead to be honest who had prejudices against working-class people and women. Being someone who falls into both of those groups, he came across incredibly stuck up, ignorant and in his own world quite frankly. He didn’t seem to have any understanding of people outside of anyone who wasn’t like himself and it felt like a bad reflection of writers in a way which annoyed me as a writer because we certainly wouldn’t all share his prejudices. Sometimes as well as being a man and a richer person, it did feel like he thought he was above everyone because of his status as a writer and that certainly didn’t come over as cute at all.

It was my introduction to Defoe’s work but it doesn’t put me off reading his other work. I read work by authors who have questionable views a lot. I base it on the work, not the writer because I’m a writer myself and that’s the fairest thing to do but it didn’t paint a great image of the man behind the work for me. Look, it was his opinions. I’m glad he got the opportunity to express them but the views in my opinion were really disgusting and self-entitled.

For more about Daniel Defoe and his work go to: