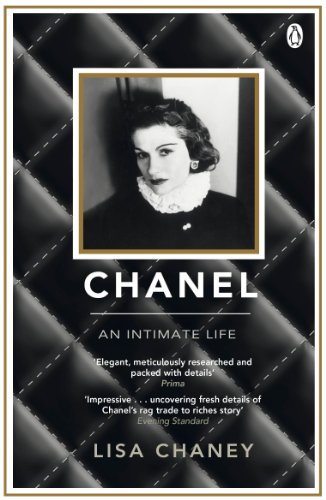 Coco Chanel: An Intimate Life (2011) by Lisa Chaney is a very interesting read for anybody interested in fashion and learning more about Coco Chanel’s life.

This book gives a very honest picture of Chanel as both as artist and a person. I used to study fashion so I did know quite a bit about her prior to reading this book but I definitely learned a lot more. It’s very indepth. As well as talking about Chanel, the author gives fantastic overviews of the time periods and the attitudes especially in relation to fashion which were popular then.

I love Chanel clothing and there is a lot to like about her as a person but a lot not to. And the balance tips in the favour for me of not liking her. However, I do think she was extremely talented and deserves her place in history as one of fashion’s greats. On the good side as this book shows, she was a working-class, bi woman who worked extremely hard to get to the position she did with class, sexual orientation, romantic orientation and her gender against her. As a working-class, pan, omni woman who knows how hard that is, I will always admire that about her. I liked how she changed up fashion, wore outfits which were masculine and liberated women sexually and romantically. On the other side, I found her elitist once she did make it, not very fair to her workers, homophobic and I do believe she had some involvement in Nazi work so no, overall not my kind of person at all.

I think Chaney really did get into the emotional complexity of Chanel. She showed the vulnerability that was present inside a woman who always had pressure to show a strong front. She certainly had that strong side but she also had the vulnerability side and Chaney showed very well in this book how torturing it was for her to keep that front up at all times due to pressure in the industry to keep her brand’s image but also from herself to do the same for fear it would come over as weakness. I mean thinking of the time period, it would have been hard for her to express that. Even now, a lot of people wish you would keep your vulnerability to yourself but certainly now there is more openness to listening to the pain and insecurities of other people whereas in Chanel’s time I think it would have been seen as weakness so I understood why that worried her so much.

The book has an array of names in it who Chanel knew such as Jean Cocteau, Sergei Diaghilev and Salvador Dalí. She also knew Raymond Radiguet, a writer who died at just 20 from tuberculosis. She arranged his funeral which I thought was kind of her. I really liked Raymond from what I read about him. He seemed really great and I would love to look into his work in the future. Other main features of the book are Chanel’s romances, her troubled childhood, her rivalry with Elsa Schiaparelli and her drug use.

It is an intriguing look at both her work and her life. I think it was a brave write in a lot of ways by the writer because it was a very honest look at Chanel’s life and not through rose-tinted glasses due to her legend. But I think it is a fair book. The writer puts in what she researched good, bad, inbetween and all the rest or that’s how it came across to me. It is quite a long read but I found it interesting. And if you like fashion, you probably will too.

To purchase Coco Chanel: An Intimate Life by Lisa Chaney go to:

For more about Lisa Chaney and her work go to:

And for more about Coco Chanel and her work go to: