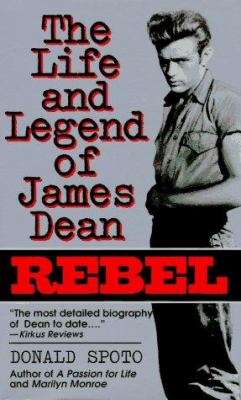 Rebel: The Life and Legend of James Dean (1996) by Donald Spoto is a great read about the Hollywood legend.

This book is a very informative read and gives great background on Dean’s life growing up and the emotional upheaval he experienced when he lost his mother and hadn’t much of a relationship with his father. Through interviews with family, friends, other halves, costars and directors, Spoto has assembled a book with more tales about the young actor who lost his life in a car crash back in 1955.

In this book we read about the behind the scenes of the few films he starred in, his times in the gay scene in Manhattan, Broadway, Burbank and his drive to succeed followed by what appeared to the outside an overnight success. It also deals with the aftermath of his death and the legacy he has left behind. Dean is a difficult person to describe as he did seem to be very complex. One part of him seemed to be difficult and hard to work with and yet the other side of him seemed to be gentle, nerdy and actually quite fun.

He came across as a loner and actually an introverted person too. So I would imagine constantly talking to this person and that person in the business was not the easiest thing in the world and I think there was a braveness in that. Not in becoming an actor because obviously being introverted in your craft and in talking situations are too different things and I think he could do the acting side of things in his sleep. But I think there was a braveness in taking on the constant chatter that went with his job and which isn’t always easy for introverts.

There was moments that made me raise my eyebrows but all in all I quite liked him from this book. He did have a certain charm about him and that probably boded well for him with his career and in romance.

I think Spoto wrote an amazing and interesting book here. The only flaw I could find was he did tend to go off into other topics which may or may not be of interest to Dean fans. It didn’t bother me when I was interested in the topic he was discussing but when it didn’t it kind of threw me out of the reading zone I was in.

A very interesting read about a complex but endearing, likable man.

To purchase Rebel: The Life and Legend of James Dean by Donald Spoto go to:

And for more about Donald Spoto and his work go to:

And for more about James Dean and his work go to: