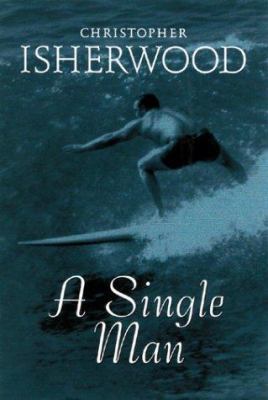 A Single Man (1964) by Christopher Isherwood is the book which the film of the same name was based upon.

The book is told from the POV of the protagonist George who is suffering grief after the unexpected death of his boyfriend Jim. George is a professor, originally from England, but living in America. The story follows an everyday day for George since Jim’s death and is very understated but done beautifully.

This was a book I wanted to read for a while. I absolutely loved the film and as there is not a terrible lot of difference between the book and the film, I absolutely loved the book. I wasn’t disappointed at all in it. It is a reasonably short read so you could read it in a couple of sittings. Grief and the meaning of life are the central themes of this book. The way George describes the changes in his life since Jim’s death is heartbreaking to read. All the little things that have changed for him now that Jim is no longer there in the house with him. That is very realistic of grief as is the survival to go on but finding yourself going through the motions when the grief is at its height. And George is questioning life and what it all means, if anything, since Jim’s death which is also realistic.

I do love how real George is, how Isherwood wrote him very real. No filter. That is scary to do even now, to do it in the 1960s, wow. Especially with some of the opinions and inner thoughts George has. I was like whoa, I love this! Isherwood dealt with issues like prejudice and gaslighting, issues which are still taught of as controversial by many to talk about in society today, in 1964 and that blows my mind. He was one brave dude! He writes George as not liking these things and being angry about them. He allows him that right without judgment which is rare sometimes to find in fiction or most things really. I could definitely relate to the long mind rambles George went through. I would imagine a lot of people can.

I liked George and Jim. They were my two favourite characters but I did like Charley in the book too. I didn’t really like her in the film though Julianne Moore did play her brilliantly. In the book though, she was grand. I think what is so amazing about this book too is that it is very easy to relate to. The idea for it is simple but effective. It is a day in the life of an everyday man doing everyday things. The genius in Isherwood’s writing here is that he didn’t try to create excitement for excitement sake, he didn’t sugar coat George and he wrote what he clearly observed and felt was true as opposed to trying to please every single reader. It is a stunning write, absolutely stunning.

To purchase A Single Man by Christopher Isherwood go to:

And for more about Christopher Isherwood and his work go to: