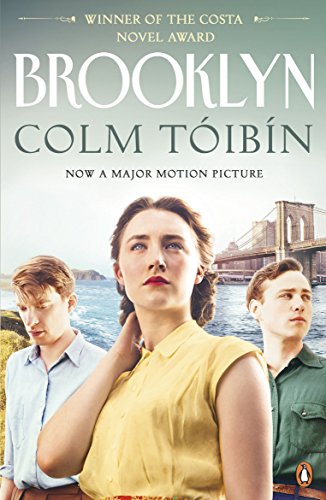 Brooklyn (2009) by Colm Tóibín is of course the book which the movie of the same name was based on.

Set in the early ’50s, the book follows Eilis Lacey who leaves Enniscorthy, Wexford to make a new life for herself in Brooklyn. There, she works in a department store and meets her husband Tony but returns to Ireland when her sister Rose dies unexpectantly. There she finds herself having feelings for Jim Farrell and questioning whether she can return and leave her mother alone back in Ireland.

I did like the film but I liked the book even more. Obviously, it is I would imagine a difficult task to bring a book to life with the same amount of detail on scene. I felt I got to know Eilis a lot more. We could see in the movie that she was nice but in the book we got to see her opinions and her inner feelings a lot more. More of her emotions regarding Tony are in the book, her fears about leaving and her homesickness while there. She is also more opinionated, a bit more cynical and more interesting. The book deals with a lot of important issues. The department store Eilis works at opens their doors to people of colour and faces backlash for doing so. Racism is highlighted through conversations Eilis has with her landlady and fellow lodgers. Colm Tóibín actually writes a lot of issues into conversations and situations surrounding Eilis’ lodging quarters. In other conversations, prejudice against Italians and Italian-Americans is discussed. Bullying is also an issue highlighted when a new woman from Ireland comes to live there and many of the other girls are trying to isolate her. Classism comes into that situation as well. Workplace bullying is also spoken about through the actions and words of Eilis’ former employer in Wexford and through Eilis’ mother’s words about how that employer was bullied when she was younger. Sexual harrassment is also highlighted via something that one of the girls says about another girl who left the house being followed by a creepy man. We never find out if this story is true or not but it highlighted dangers like sexual harrassment and stalking. Prejudice against Irish people was also highlighted through the prejudice Eilis’ brother, who lives in England, has faced. Manipulation is also spoken about. Eilis’ landlady gives her the biggest room in the house as a way of getting back at the other girls who she doesn’t like. She uses Eilis in a scheme that mostly benefits her.

Rose’s death always makes me emotional. When I seen her death in the film, I cried a bit in the cinema and when I was coming to that stage in the book, I had to take a bit of a break before I read it. It guts me every time because I have an older sister who reminds me so much of Rose. Like Rose, she always wants to put my needs in front of hers, is always there for me and I would be lost without her. Rose is my favourite character because she reminds so much of my sister. Grief is another issue in the book and the painful decision that Eilis must make about whether or not to go back to New York is so realistically written and all the more gut-wrenching for it. It is a decision I would dread having to make because there is no right way of doing it.

To purchase Brooklyn by Colm Tóibín go to:

And for more about Colm Tóibín and his work go to: