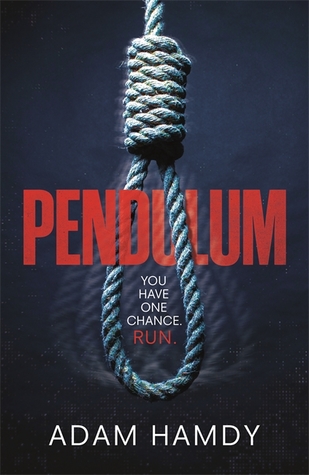 Pendulum (2016) by Adam Hamdy is an engrossing thriller.

The plot opens in pretty dramatic style when protagonist photographer John Wallace is almost killed by an unknown killer known as Pendulum. He manages to escape but finds himself in a psychiatric hospital because it is thought that he tried to kill himself. John must find a way to get out of the hospital and find and confront the person who tried to kill him. Eventually he does and soon has help from DS Bailey and recently demoted Special Agent Christine Ash.

The plot sweeps along and is engrossing throughout. The central characters of John, Christine and Connie (John’s murdered girlfriend) are not the most likeable though. John has some terrible views and ideas about mental health and when he assumed Danny (who was my favourite character because he was funny and down-to-earth) was into girls straight after he met him, that was another flaw. We don’t find out who Danny is into because he is not too long in the book but long enough for John to be heterosexist nonetheless. There is a lot I like about Christine but the way she was with the adrenaline shot in the hospital near the end was dodgy as all hell. Connie, I don’t know what it was really, but she seemed quite detached and I didn’t really get to know her too well in it for a character so central to the plot.

The novel combines elements of modern and old-school cozy mystery which works a treat. The ending to the novel and the reasoning behind the murders is very original and manages to bring out an important message. But there was elements with it like knowing the killer way before the end with no surprise factor and an accomplice who was never named which were fine but personal taste wise, took a bit of the excitement from the ending for me. But I did like the originality of what the author was doing. It was a very clever ending and a lot of the plot very much fit with it which made the book very cohesive. That is hard in mystery writing to do so kudos to the author on that.

To purchase Pendulum by Adam Hamdy go to:

And for more about Adam Hamdy and his work go to: