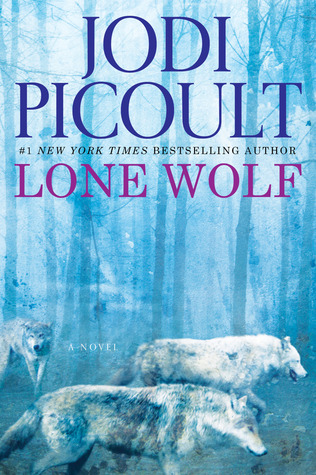 Lone Wolf (2012) by Jodi Picoult is the story of the Warren family following an unexpected car crash.

Luke Warren is in a vegetative state following a car crash after going to drive his seventeen year old daughter Cara home. Cara is also in the hospital but her injuries are not life-threatening. Cara’s mother and father are divorced and her mother Georgie has since remarried a lawyer called Joe who she has a twin son and daughter with. Luke and Warren have a son together too and Edward, who is twenty-four, has been living away in Thailand for a good few years. He returns home following his father’s accident. With the four of them back together again, things soon spiral out of control over differences in opinion about whether Luke’s machine should be turned off. Cara is only seventeen and Edward has been away for a while. Working on his father’s wishes from a document he gave him at fifteen, Edward believes his father wants to die and proceeds to pull the machine out himself in very Hollywood style. Cara is devastated when she comes in and witnesses him doing it but the medical staff manage to get Luke hooked up to the machine right again. Edward is arrested for assault after accidentally bumping off a nurse in his haste to pull the plug. That charge soon becomes a murder charge after a shifty lawyer manages to convince a hurt and fearful Cara to testify that her brother wanted to kill his father. Malice is the sticking point and Cara lies that Edward was vicious in his wording after pulling the plug. Thankfully after Edward has spent a few days in jail, Joe manages to get the charges thrown out.

Luke and Cara are very close. Following her parents’ divorce, Cara chose to live with her father. Luke loves hanging out among wolves and is a bit of celebrity for his work with wolves. So Cara helped him a lot with the wolves before the crash. She resents her brother walking out on the family and she is determined to keep her father alive. She is also living with guilt as well as pain as we discover later in the story.

I don’t want to ruin the story but I need to make this point because it was annoying me for half the book and it would be wrong not to mention it because of that. Initially we are led to believe that Edward left because his father and he had an argument after he came out to his father that he was gay. There’s a bit more to that but I won’t spoil the story. I liked that Picoult wrote the various opinions into the story because you do get all sorts of opinions about someone doing that. But by the end, I felt the message was that Edward was in the wrong to walk out. It is a difficult situation to find yourself in and that was kind of dismissed by the end that he was impulsive, immature and stereotypes such as that. Considering that being in a situation like that where you are made feel unequal can often play havoc with your wellbeing or mental health, people are the best judges of what they can take or not and where they feel more comfortable to live their life. Normalising those kinds of responses I don’t find healthy. And if I didn’t put that in the review, I would be bypassing something that subjectively as a reader was something that made me quite uncomfortable personally. There was certainly moments Edward was impulsive but I wouldn’t find him so in that situation.

In saying that, this book does deal with important issues and does so brilliantly. The issue of the right to life/right to die is very emotionally written. You can very much understand that they are both coming from good places but different places and that in both their hearts, they want their father to wake up. I liked the way the wolves were a huge feature in the book and Luke’s passion to help them was gorgeous. It showed how people should treat animals and don’t always.

My favourite three characters were Edward, Joe and Georgie. I just found the three of them the nicest and I would look forward to their chapters as the chapters are told from different characters’ points of view.

It’s an interesting read and has a lot of twists and turns you aren’t expecting in it. It’s put together well.

To purchase Lone Wolf by Jodi Picoult go to:

And for more about Jodi Picoult and her work go to: