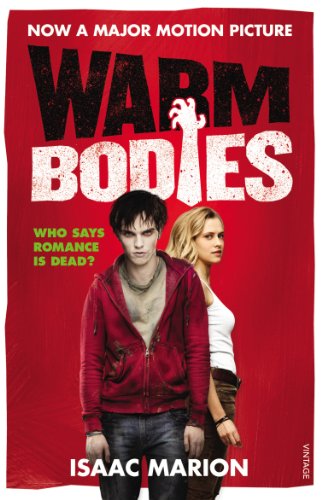 Warm Bodies (2010) by Isaac Marion is the first in the author’s Warm Bodies series.

Many people might know this story from the 2013 film of the same name which I haven’t seen but would like to. This book began from a short story called I Am a Zombie Filled with Love which gives you a slight idea from the title of possibly what a lot of the message of the full-length book is.

We meet the protagonist R who is a zombie and is not sure when he died or what his name in life was previously. All the days since his death have been long and monotonous. He is married and is a father with a female zombie who also has a male lover and is very open about it. Oh, and he is killing people to survive on the regular. But then things change when he meets Julie who is a non-zombie and finds himself unable to kill her but he does kill her boyfriend Perry and share his brains with his friend M. He brings her to his world and doesn’t tell her that he was the one to murder Perry. Gradually he and Julie become friends before eventually falling for each other.

But they have some obstacles along the way to happy-ever-after together like R’s secret, the Boneys attacking them, Perry being constantly in R’s mind after he ate his brains, Julie’s and Julie’s friend Nora’s everyday flippant prejudice of zombies and Julie’s father’s dispproval of their relationship because R is a Zombie. He is a hard man to please even without him being as he didn’t originally take to Perry either.

The book has many elements to it. There is elements of romance, horror and drama. But the biggest part is the very strong messages coming through of identity, what it means to be human, prejudice and people coming together and understanding each other despite their differences and the idea that the power to change is within us all if we want to change badly enough. There is also the message of remaining yourself through Perry’s story. He changed to fit Julie’s father’s ideal image of him and he was never happy again after that.

To purchase Warm Bodies by Isaac Marion go to:

And for more about Isaac Marion and his work go to: