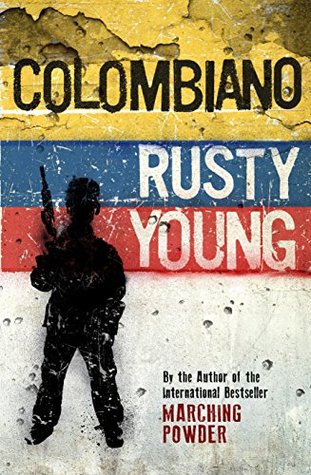 Colombiano (2017) by Rusty Young is an incredibly powerful read.

The book is a fictional story but is based on the author’s own life experiences of working in an undercover capacity in counter terrorism for the US government.

The book follows the story of Guerrilla groups and the army in Colombia. We meet 15 year old Pedro Gutiérrez who finds himself caught up in a situation where child soldiers are been pressured into joining these Guerrilla groups for numerous different reasons. Gutiérrez’s life is turned upside down when he witnesses his father being murdered in front of him by a Guerrilla group because of letting the army have water which leads to him and his mother being put out of their home and farm. They are not let bury his body or get a priest to pray for him. Left in a desperate situation and filled with grief, guilt and pain, Gutiérrez vows to get revenge for his father’s death. He and his best friend Palillo join a terrorist organization called the Autodefencas and here he learns what he needs to be the murderer he wishes to be in a bid to get revenge for his father’s death.

This is a long book and you certainly won’t read it in one sitting. It might take quite a few sittings. It’s heavy so it is probably best to read it in parts too because of that. But it is engrossing, enthralling and very interesting but really sad too. The chapters are not long though so it an easy book to dip in and out of and not forget where you stopped.

The writing is brilliant and you can tell it is an extremely well researched book. Young shows the fear people face in a society filled with violence, revenge and lack of freedom. Highly poignant and upsetting is the way we see a snapshot of what Pedro’s life could be if he wasn’t caught up in this situation of so many people filled with hate who are starved for power. Inbetween the heartbreak of this book especially in the earlier chapters we see happier moments with Pedro and his parents, Pedro and his girlfriend Camilla and Pedro and his best friend Palillo. But he is forced to see things so young that some people never see in their lives and it ultimately changes his future.

This book is deeply eye-opening and thought-provoking. It is so heartbreaking and terrifying but so powerful and a story that needed to be told so much kudos to the author for doing so.

Very much recommended. An incredible read.

I would highly recommend this book and I would like to thank Lily Green at Havelock & Baker Publishing and NetGalley for providing me with an ARC version in return for an honest review.

To purchase Colombiano by Rusty Young go to:

And for more about Rusty Young and his work go to: