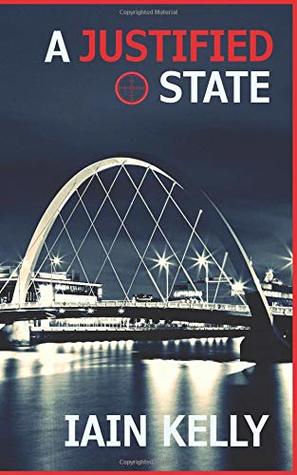 A Justified State (2018) by Iain Kelly is an intriguing and thought-provoking read set in a dystopian future.

The story follows protagonist Detective Danny Samson as he tries to solve the murder of Consul Donald Parkinson alongside his partner Henrik. Very quickly they receive a lead on the Consul’s killer: Gabriella who used to be in the military. The book changes in different chapters between both Danny’s and Gabriella’s stories and as the book progresses the mystery deepens and deepens leaving the reader with many questions like any top-notch thriller should such as why was the Consul killed? Who is the mysterious Symington who hired Gabriella to murder the Consul? And the unsettling question of Gabriella seems nice enough so what caused her to do this? As the novel continues more murders occur which add even more questions to the mystery. After all Gabriella is not at the scene of these new murders so who is doing them? Symington or someone else? Or is there a group of people involved?

Kelly has written a great variety of characters here with fully-fledged stories. Danny for instance has a lot more to him than just investigating the case. Important issues come into his story such as mental health and depression through his own feelings following his estranged wife’s suicide and the deaths of their twin son and daughter. These issues are also dealt with in his estranged wife’s story and in general stories of the citizens. Gabriella is another well-written character who seems to have a lot of layers beyond the stereotypical assassin personality type. There is much background story to both of these central characters which unfolds in both cases piece by piece as the story progresses. Danny’s partner Henrik is a character who is quite naïve. He believes that the state is always looking after the citizen’s best interests without question and is shocked and disbelieving when he hears anything different. He seems alright but is definitely brainwashed which can often make him bias in terms of the case. But in his favour he does put that aside eventually in his investigations when he needs to and doesn’t completely hinder the progression of the case. My favourite character was Montana Childe, the Consul’s junior secretary. I think I seen a lot of myself in Montana (well maybe a little less braver than her I admit!). She is someone who is determined to succeed, wants to help where she can and is a gutsy person who is so straightforward and to the point. I think we would definitely be friends.

This story is a classic thriller with many twists and turns to keep readers guessing. It has a slight James Patterson feel in that it swaps from the detective’s story to the killer’s story in different chapters and that helps it be very cohesive and gives the reader a taste of what the story is like from the different angles. That helps the suspense to build and each chapter provides more information to move the case ever so slightly along. The tension is built perfectly.

In addition the novel also deals with many important issues such as depression, mental health and suicide as mentioned above. Another issue it deals with is class. The way those higher up are treated and the things they are allowed to get away with is in striking contrast to those lower down the pecking order. The book also speaks about gender and it was lovely to see non-binary people included as well as men and women. It was really cool to see a non-binary character in a huge part of the story in Montana. The author presented very well the prejudice non-binary people face by showing how many of the characters were dismissing that Montana was non-binary. Other issues spoken of in the book are the murkiness of politics and how many in power use that power to get what they want and the gray line between right and wrong and whether murder is ever justified. The last area really has a lot to do with the mystery and it’s conclusion so I’ll say no more there so that I don’t give anything away.

I think the way Kelly has blended sci-fi elements into such a traditional cosy thriller is very cool and gives the novel a fresh take. It is a very fast-paced and interesting read with great attention to detail and much background information. Brilliantly written.

To purchase A Justified State by Iain Kelly go to:

And for more information about Iain Kelly and his work go to:

9 comments on “A Justified State By Iain Kelly Review!”