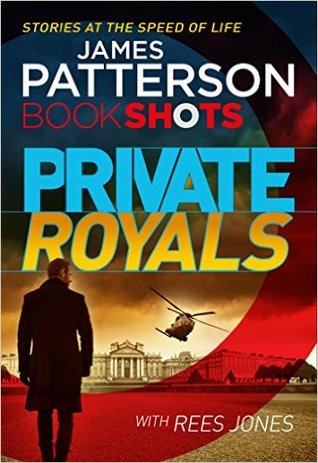 Private Royals (2016) by James Patterson with Rees Jones is a wonderful short read if you’d like something to read but haven’t much reading time available.

This book is part of the BookShots series that presents the reader with “Stories at the speed of life” and this is a great little read. Patterson has written with various authors many of these lightening fast reads that could be read in 1-3 sittings and this is the first one of his BookShots I’ve read.

This political thriller is very slickly written. The fact that this book is shorter than many of Patterson’s books does not stop it from being suspenseful and engaging so kudos to Patterson and Jones for that. This book is set in London where Jack Morgan is going to see Peter Knight and the investigation agency team called Private. The Trooping the Colour parade is due to take place for the Queen’s 90th birthday the next day and while at a party the night prior to this, Morgan gets a call from the Duke of Aldershot who tells him that his daughter Abbie has been took hostage and asks him and the team for help in finding her before she is murdered. Morgan is on a deadline where he must locate Abbie before 11 a.m. the following morning, who has a £30 million ransom hanging over her, or Abbie will die. We get much background on Abbie who is a royal wild child who is usually in the papers for undesirable reasons related to drugs and alcohol.

This book is stunningly crafted. It is very entertaining and deals with many issues like corruption in high circles and public image versus private image. There is also some educational information about royal ceremonies and how they are put together. It is very addictive with fast-paced chapters and would definitely encourage me to read more of the BookShots series in the future. Though I have read many Patterson books, Jack Morgan was new to me as I haven’t read any of the Private stories as of yet. This is a great introduction to the Private series. Morgan is yet again another interesting sleuth and this is action-packed, weaved together wonderfully and has many twists and turns in the tale.

To purchase Private Royals by James Patterson with Rees Jones go to:

And for more about Rees Jones and his work go to: