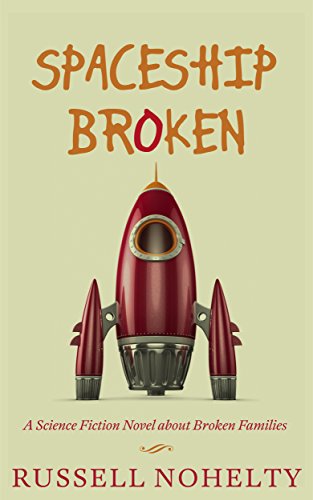 Spaceship Broken (2016) by Russell Nohelty is an interesting and stunningly written story about the ups and downs of life, forgiveness and family.

The book follows the story of a young boy, our protagonist Sammy. The story is told from Sammy’s point of view. Sammy has had a difficult start in life and has seen more pain already than most people see in a lifetime. His father has abused his mother on countless occasions and his mother decides to get Sammy and herself away from him. Eventually after running out of money and fears arising about Sammy’s terminal lung condition, they go and stay with her father and Sammy’s grandfather. Soon Sammy meets a young girl called Yva and a young boy called Frank. The three become friends and Yva soon confides to Sammy that she has started building a spaceship to get back to her planet. For the first time in his young life, Sammy has fell in love with his new alien friend Yva and the feeling is mutual and he becomes hell-bent on helping her get back to her planet even though he really doesn’t want her to go.

While the book is part sci-fi, it also deals a lot with more earthly aspects as well like family dynamics, first love, friendship and the run-of-the-mill aspects of daily life like school in Sammy’s case and his mother with work as she tries to hold life together for her son amidst her drug addiction.

There is a realness and grittiness in the writing. At no point is the story sugar-coated which can make it sometimes hard and emotional to read but that truth adds so much to the story. You can tell that the writer really cares about the characters. Scattered in parts of the book is much humour too.

A quirky, real and wonderful read.

To purchase Spaceship Broken by Russell Nohelty go to:

For more information about Russell Nohelty go to: