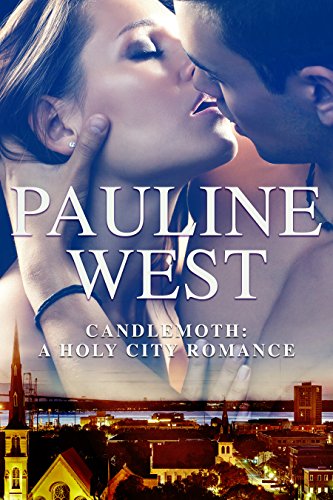 What struck me most about Candlemoth: A Holy City Romance (2015) by Pauline West was the realness of it. Page by page, it felt like a fictional look at real life and the real emotions people feel inwardly as well outwardly. Each character is very well rounded and we get to know even characters that aren’t the two central characters Lily and Ry very well.

Set in Charleston in South Carolina, the book is the first in a three-part series and follows the main character Lily Inoue who is a waitress who falls in love with the wealthy Ry Calhoun. Without spoiling anything, there is many ups and downs in their journey of love which is all very interesting and keeps you turning the page. What is great about these two characters is that they are both quite complicated and have so many different aspects to their personalities. I especially love the feistiness of Lily and the gentleness of Ry. I think it’s always an interesting romantic starting point when you pair a working-class person and a rich person and show that their love can cross that boundary of class and that they want to be together despite outside pressure from other people and society in general so as a reader, you’re always going to be fighting for them to bypass those boundaries and pressures in the pursuit of love. Lily and Ry are polar opposites in so many ways and yet very similar in more ways. There’s also a lot of background information about both Lily and Ry which helps the reader know where they are coming from more in situations that occur. What is really good about both of them, and in general most of the characters, is that they feel imperfect but not overly imperfect and therefore real. I also loved Lily’s relationship with her father Steve too.

There is quite a steamy element to the book which I didn’t mind but if that’s not your bag than this book might not be for you. Just warning you all of that! 🙂

As much as I like Lily and Ry, my favourite characters were Beren and Chandler. I took to the two of them instantly and was very invested in their love story. I knew someone who reminded me of Beren in the past so he reminded me of him which was nice because he was a lovely person. So yes, I didn’t want Lily and Ry to not be together but I really didn’t want Beren and Chandler not to be together! I absolutely loved them and like Lily and Ry, they were very real and rounded characters.

My only slight problem character-wise was with Madison. I know she’s supposed to be the bitch who is trying to tear Lily and Ry apart but she felt very one-dimensional to me. I felt like that was her only purpose in the story. Don’t get me wrong, I was never going to like her but I just felt she should have some good qualities as even people who aren’t nice do and I felt nothing. It felt like she was a robot instead of human and very much there just to show how Ry would want to be with Lily instead of her. In saying that, some of Lily’s lines in scenes with Madison were classic and I found myself chuckling along and saying, “You tell her girl!”. Madison is probably a difficult character to make human but still.

This book ends on a cliffhanger like all good trilogies so I was delighted to have the follow-up books on stand-by because, and this is a very good sign, I wanted to know what happened next. There’s clearly been a lot of work put into this book and as both a reader and writer I appreciated that. And this is a gorgeously written and intriguing romance that like me, I’m sure you’ll enjoy very much.

I will be reviewing the next two books in the trilogy over time so keep your eyes open for those two reviews. 🙂

I received an ARC from the author, with no obligation to review.

To purchase Candlemoth: A Holy City Romance by Pauline West go to: