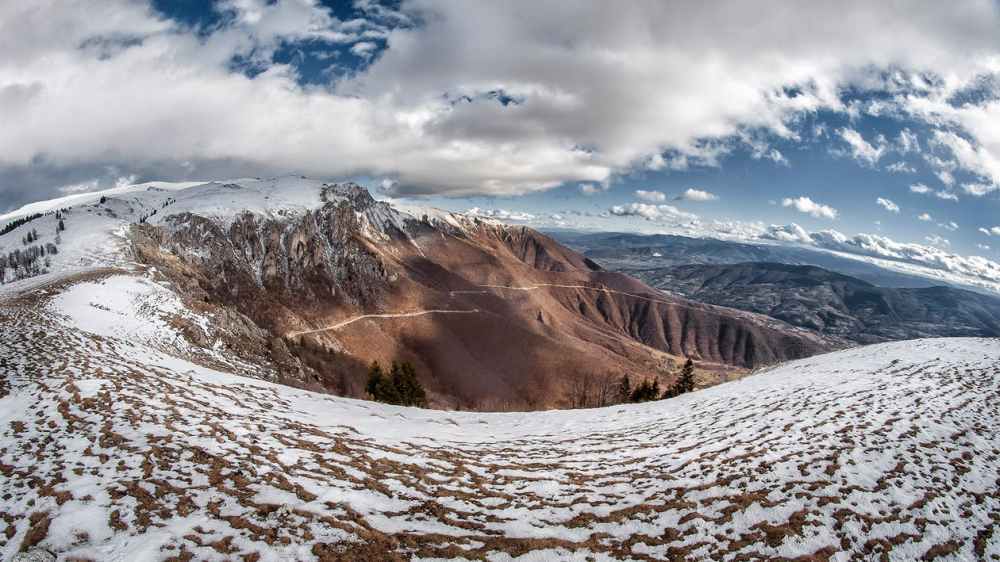 Civilization was slipping further and further away.

Upon the mountains, I felt the snow beneath my feet. It felt like days that me and this other bloke had been moving along. Made longer by the fact that he muttered at everything I said. I was lucky when I got a word out of him. And even then, that’s what it was: one word. It felt like civilization was slipping further and further away. Even more so than before. If that was possible. I took the bull by the horns. It was going to happen eventually.

‘Hey mate, I don’t like this any more than you.’

He grunted. I continued anyway.

‘But it appears like we are the only living survivors left on this god-forsaken planet so you know maybe we could try to at least get on. Maybe a little bit even. It’s going to be very lonely otherwise.’

A flicker of what looked like anger passed through his eyes. Momentarily I was frightened. I was in the middle of nowhere with him after all.

‘My whole family was wiped out. Do you know what that feels like?’

Admittedly I didn’t. I had grew up an orphan and I wasn’t very good at making friends either.

‘And now I’m stuck out here with you and you’re a right mouthpiece to top it all off.’

‘Well actually I’m an introvert but compared to you, it isn’t so hard to be a mouthpiece.’

I thought he might knock me out but instead I seen a flicker of a smile pass over the side of his mouth. Wonders never cease. The man can smile. Sort of.

‘You know, you were just the kind of guy that I used to go for. Back when I was living.’

‘You are still living …’

‘This isn’t living mate. This is slowly dying.’

‘Really, I was the kind of guy you used to like?’

‘But we’re like out here, cold, with very little food, no humans, no animals, heck no insects and no chance to make any humans to share the world with …’

‘Didn’t you learn anything at school? Oh forget that, schools are pretty rubbish.’

‘How do you mean? My school wasn’t bad. I learned enough Maths to get me through. I was an accountant you know.’

‘Didn’t do much on the biology side, did they?’

‘Well we did learn that a woman and a man create a baby. Sorry but two men can’t.’

‘Ah, of course. The cis-based school system. Can’t be too hard on them I suppose. Society was a cis-based system too.’

‘I have no idea what you’re talking about.’

‘Your gender matches what you were assigned at birth. Me, on the other hand, I’m trans.’

‘You were born a woman?’

‘No, I was assigned female at birth and my gender is male … just saying, it ain’t impossible for two guys to create a baby. It wasn’t an invitation to do so.’

I was getting agitated because I was almost blushing.

‘I told you back when we met all of six miles ago … Robert. Oh right, you mean my birth name, don’t you? So you can say that’s my actual name, well it isn’t …’

‘Whoa, calm it. Jeez, cis people must have been awful to you.’

‘Well a lot of them weren’t very nice. I was in college studying engineering and I suffered a lot of abuse once many people realised. I dropped out, became a recluse, end of story.’

‘It was my own fault. I wasn’t strong enough.’

‘No, mate, it wasn’t your own fault. And no, I wasn’t going to ask what your birth name was. By the way, I’m Edward. I don’t think I told you that six miles ago.’

‘No, you didn’t tell me much six miles ago.’

I looked ahead to where Edward was staring. There stood an empty supermarket packed with food and drink. Definitely this was a result. And my stomach very much agreed.

We made our way into the supermarket and began to eat and drink, bringing our bodies and minds back to life. I found two blankets in one section for us to keep warm with. We sat under them continuing to fill our stomachs up.

‘There’s an empty flat over the supermarket. Might be a good place to start raising a family.’, Edward said, with a grin.

Best to play slightly hard to get. But inside, I knew it was probably going to happen. There was a mutual attraction there so why not? Only time would tell. And it was nice still to have time, still to be alive. And each second it was becoming even better to be alive.

Written in response to black CATastrophy’s writing prompt at: