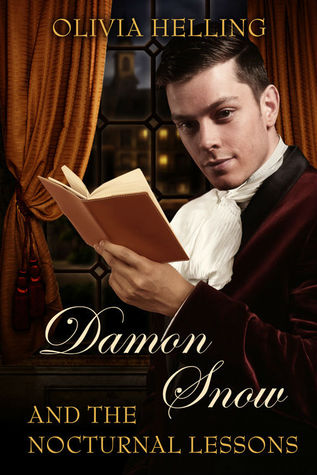 Nocturnal Lessons (2014) by Olivia Helling is the first book in the Damon Snow series of books. It was a wonderful read from start to finish.

The story is set in Mother Dover’s brothel where protagonist Damon works. He is someone who acts very sure of himself, all macho doesn’t believe in love, doesn’t believe it exists and yet as the book progresses we see that his emotions about love begin to change slightly and he begins to be slightly more open to the prospect and shows that there is romance in his heart when he plays cupid for his friend who works as a prostitute alongside him Kendall and a client Price. He’s very interesting and there is a complexness there within him that is going to make for a very interesting series of books. And he seems to have a really good heart that he’s buried deep in order not to be hurt. Helling writes into her stories a variety of very rounded characters with their own individual personalities so while you’ll probably like all the main characters, you will probably take to one more so than the others. For me, I took very much to Kendall. I think he reminded me a lot of myself and I knew where he was coming from a lot. There’s a vulnerability to Kendall but there’s a lot of strength there too. He has come from a very difficult situation and he’s determined but also daunted by the prospect of happiness with Price. And he’s bit of an old romantic too. Price was a wonderful character too. He is a character that you get to know as each layer peels away of his story and his personality. And then there’s Byrne who is Damon’s mentor. He seems like quite a complex character. His intentions seem to make sense but his method is very complex and you aren’t always sure where he’s going with it. But hey, that’s probably a good thing as it’s a series. Rogers is also a great character. He’s sort of played a supporting role in this book but I kind of hope in books to come that he’s going to end up with Damon. There is a kind of a comfort and ease with the two of them when they are together which I think is great and I’d love to see them progressing to the next level. Be warned, I haven’t read the rest of the books yet so I’m probably barking up the wrong tree with that one! 🙂

Damon is an incubus and I’ll just touch on that fact briefly. I had to Google what it meant. I didn’t think it added much to the first book but as a series I think it will feature more most likely in future books and I think we were probably introduced to that fact for the sake of the plot of future books more than this one. I think it was interesting however though to make him an incubus and not make it a central theme because after all it’s only a part of him and there’s so much more to him than the fact he’s an incubus.

This book is an interesting story of love, learning about life and love, friendship and Damon’s search to find himself. It is interesting throughout and leaves you wanting to know what happens in the books that follow to Damon, Kendall and co. I intend to read the rest of the series in the future. This book is a must-read. Helling has a very natural writing style. Completely the kind of style I like in writing. The writer who came to mind who I would compare Helling’s writing to was Agatha Christie. Obviously the genres they write are very different but the way they put it down on paper is similar and I think that’s really cool.

To purchase Nocturnal Lessons by Olivia Helling go to: